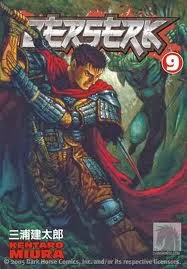 I've been slowly making my way through Berserk. It's got to be my favorite manga ever but I'm slow to get through it considering it's nearly 50 volumes long now. I really feel like I know and understand the characters in the story. I find it the easiest story to get lost in. At this point in the story a lot has happened. Guts and Caska have grown close and both have acknowledged (to some extent) their feelings for one another. At least, they've had sex a few times and made little attempts to hide their emotional connection from their comrades.

I think the most interesting plot development was the imprisonment of Griffith and his subsequent mutilation. The idea of this beautiful man being torn up and tortured for a year... well apparently most of the skin was removed from his face although, the author has not allowed the reader to see it at all! Instead he wears the Hawk helmet/mask...(thing???) Not to mention the fact that his tongue has been removed. For whatever reason Princess Charlotte (moron that she is) thinks that Griffith is a good person and wants to save him. Everyone wants to save him but ultimately, Griffith's true nature has yet to be revealed to them. This is the past remember. The first 4 books take place in the present, following that it's the Golden Ages for Gutts and the Hawks which is a retelling of past events.

I'm anxious to see how Caska deals with the situation and just exactly how Griffith gets his creepy necklace back. There was a few hints that the Godhand have already contacted Griffith but we don't know how much. So many questions.. I love it when an author chooses to tell you parts of the ending but leaves out all the details and how it all came to pass. The mystery is killing me.