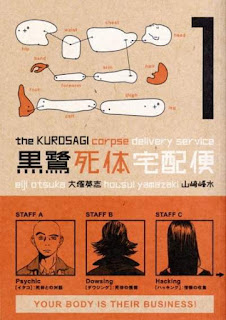 by Eiji Otsuka and Housui Yamazaki

This was a quick read and pretty entertaining. I dislike dissected women in my books however. Most of it was fairly light hearted. A rag-tag team of un-employables decide to band together and create a business:delivering the dead to the after-life. The group is made up of strange people who possess various odd skills. One monk who can speak to the dead, a man who channels an alien through a sock puppet, a Japanese girl who studied embalming in America, and a few others I didn`t feel were worth mentioning.

So every chapter is like `body of the week` and it`s fairly entertaining so far. Kinda humorous, although like I said earlier, I`m not a fan of dismembered females. That whole serial killer angle has just been sooo over-used. Especially in horror manga.

It`s worth a look though and I`m going to order the second volume to see if there is more of a larger story than just `save this random soul`and move on to the next.
Posted by The Frog Queen at 8:07 AM