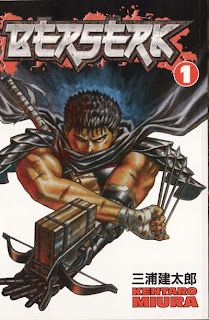 by Kentaro Miura
I like violent comics. Why?? I don't know! I've wanted to read Berserk for years and never have. So I just got the first 3 volumes yesterday and sat down to read the first one. This manga is 18+ of course which it should be since it's bloody violent and full of random sex acts and rape. Still, I like the comic relief provided by the elf Puck. It's actually really cute.

So far, I don't know much about Guts (the main character) other than he is looking for some group called The God Hand who have branded him with a mysterious bleeding symbol that marks him as some sort of sacrifice.