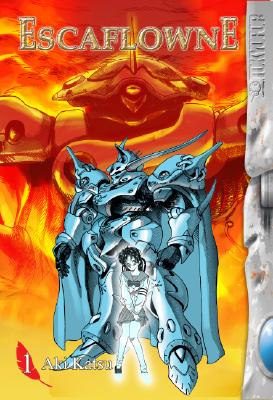 I've been a fan of Escaflowne since I first saw the anime on YTV back when I was in high school. I have never read the manga but knew that it was completely different and it is. The whole story is different. In the manga, Prince Van even has a mother who's alive. None of the characters look anything like the ones in the anime. They also have completely different personalities. Van is younger, more impulsive and dim witted. He is apparently an awful swordsman in addition. In the anime both Allen and Van were taught by the same glorious swordsman. This doesn't seem to be the case in the manga.
Hitomi on the other hand serves as the energist to Escaflowne in body, instead of the dragon's heart like the anime. She also turns into a blond, naked bombshell. This is really confusing and pointless. Male fan service. Sigh. I dunno if I'm gonna bother reading the rest. I borrowed Volume 1 & 2 from the library so I'll probably read the second book just to see where the plot goes as it is very different from the anime. The dialogue is really boring. It's possible it's a terrible translation, but man, it's really boring and childish.
I really can't wait till my copies of Berserk come in. Collin and I are gonna read the whole series together. At least aspiring too. I'm gonna go kiss my boyfriend now! CHOW!
Posted by The Frog Queen at 7:49 AM