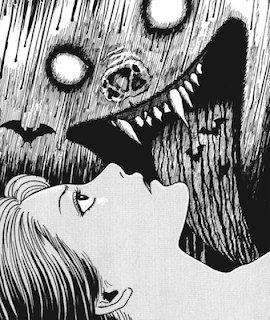 As usual, the reader is in for a disturbing surprise with this Ito story. I really hadn't guessed that bats would be incorporated into a story about an anorexic girl. Nami, a teenage girl who's ex-bf has started dating a skinnier girl, decides to stop eating to "show him" swearing that she'll be the skinniest girl she can be. Nami begins having disturbing dreams about running through raining blood! In it she sees the same hand reaching out for her, full of marks. Nami soon meets an odd boy at school who says he'll diet as long as she does. The two become close until one day the boy takes Nami to see his shed behind his house. Inside lives dozens of vampire bats. The boy explains that he hadn't been starving himself after all but actually feeding his blood to his pet bats -his friends, who have been in turn raining the blood onto Nami while she sleeps in an attempt to feed it to her and keep her nourished and alive. Nami terrified, begins to run and as many hysterical characters of Ito's novels perish, the boy is hit by a car. The interesting part is how the bats attempt to keep blood flowing through his strewn body parts. I won't give away the ending.
I know how the topic of eating disorders threatens to turn any story into an after-school special but I don't really feel like any of Junji Ito's stories are cautionary tales. There never is any lesson, just random hysteria and chaos. Always a haunting feeling like there's more to the story but Ito's just not going to tell you. In the end, you really are left with only as much knowledge as the main character obtains during the horrific events. This story is no exception as the story starts out being about an anorexic teenager, and morphs into a tale about vampires.
Not all of Junji Ito's stories are full of body gore. This manga in particular had very little, but one theme of course is used and that's body transformation while usually the transformations are gory and gross, sometimes it's just a character turning into another creature or animal. However, if you are anything like me, that whole concept is pretty disturbing. Did you ever see the Dream Warriors sequels to Nightmare on Elm St when Freddie turns that athletic girl into a cockroach?? Yeah that gave me some nightmares when I was younger. Hell, that gave me nightmares like 3 years ago when I re-watched it for Halloween. I suppose this whole transmutation is a form of body-gore but I still don't quite lump it in the genre all the way. Hmm I'll have to think about that one.
Anyway, read it! Enjoy it. I love horror.
Posted by The Frog Queen at 1:29 PM