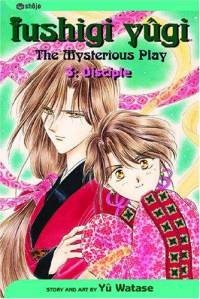 Why am I still reading Fushigi Yugi?? I have no fucking clue.. Maybe because I can read a volume in 20 minutes? Maybe because I want to see Yui and Miaka tear each other apart in some vicious girl fight? That's going to happen by the way, at the end of the second volume, Yui got sucked into the book and Miaka with her fictional friends decided to go looking for her.

In Volume 3 we learn that Yui's spent 3 months sucked into feudal Japan and didn't go as well for her as it did for Miaka. Instead Yui was gang raped and eventually found by some blond, blue-eyed foreigner. He's a knight employed by a distant rival province (Qu-Dong) and Yui finds out she's the priestess sent to save the kingdom from the other kingdom that Miaka represents. So the two become enemies but really, they only become enemies because Miaka is such a selfish cow. She's a total airhead. Even as the heroine of the story, I hate her. She's selfish, she's a pig (eats constantly, and takes food from the less fortunate!) she basically went back into the play so she could see some guy! She told Yui that she went back to rescue her! (fucking liar) Yui of course finds out the truth.
It's safe to say, I fucking HATE Miaka, at this point I'm only reading it in hope that Miaka suffers some come-upp-ins. But since this is written for teenage girls, I suspect the ending will be more like "best friends forever!" not "die you selfish wench!".
Posted by The Frog Queen at 1:25 PM