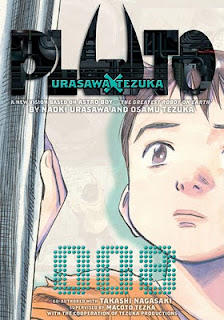 The final volume of Pluto! OH GOD THERE IS NO MORE!! Let's see.. where do I start? I LOVED THE WHOLE SERIES. Okay, I'll stop yelling.
The series as a whole, is so well planned. It has a bit of everything, action, comedy, drama, and of course tragedy. It's a very tragic story. So many characters are killed off including my favourite character Epsilon. There are a few different themes in the story. The obvious theme deals with the idea of whether artificial intelligence is capable of emotion. My mind likes to assume that anything that is sentient would posses some kind of emotions by default. Whether or not a sentient being can process the emotions or identify them is another story. Babies feel emotion even though they cannot articulate them till they are well out of infancy. I like to think that an A.I. would simply require experience in order to to do the same. In the story, whether or not robots have emotions, has mixed opinions depending on the human you ask. While the humans in the story attempt to assess the world's most advanced A.I. they also silently begin questioning what makes us human. Machines are emotionless, that's why they cannot lie as humans do. They operate out of logic and fact instead of rationalizing a lie to spare or hurt feelings. Through-out the story, several of the world's most advanced robots develop the ability to lie to spare the feelings of those they care about. This ability to rationalize & justify a lie makes them more human, more sentient, more alive.
The book deals with a wide variety of emotions developed by the A.I. HATE becomes the ultimate catalyst in the plot.
The ending, oh man- I love the ending. In a way, it seems that it's left just open enough to continue the story (of course Atom's story continues in Astro Boy) while having a complete and settled ending to the story arc. I really want to see a manga about the robot that was incarcerated for killing a human. I'd like to know his past and future. What does he do after he rids Europol of the big bad?? Do the authorities ever catch him? How the hell did he get out of that jail anyway!? See! QUESTIONS! I need a spin-off.
Posted by The Frog Queen at 1:18 PM