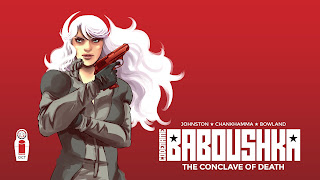 I am very pleased to kick off this release day with an exclusive interview on an upcoming release. I've once again had the pleasure of interviewing Antony Johnston who just announced his newest series Codename Baboushka. The series is currently available for pre-order and makes it's debut through Image Comics in October. This espionage adventure is illustrated in vibrant colors by Shari Chankhamma.

Each issue will feature two covers; a regular 'silhouette' cover by Shari Chankhamma and an 'art cover' by an all-star line-up of female artists including Tula Lotay, Annie Wy, Leila del Duca and Canadian Martimes' own Kate Leth.

So, I'll skip my praddling on and get right to the good stuff. The interview:

Antony: The original inspiration came when I was watching FROM RUSSIA WITH LOVE, one of my favourite Bond movies, and suddenly thought that I’d love to see a version of the story from the point of view of Tatiana Romanova, the Russian spy sent to entrap 007.

There’s also a serious dearth of leading female action characters in comics, outside the superhero universes. It’s only really in the last several years that a few creators, many of whom I’m proud to count amongst my friends, have begun to redress that balance. We’re still nowhere near any kind of equilibrium.

I wanted to create a character who could be that leading female action hero, a fighter and survivor who was in charge of her own destiny. A character that could endure, and find herself in any number of stories and adventures. Someone with an iconic look, an interesting and shady history… and a very bad attitude.


TFQ: Can you tell me a little bit about this mysterious central character, the Contessa and did you base her on anyone in particular?

Antony: Contessa Annika Malikova is the last scion of the House of Malikov, an old noble Russian line. They fled Russia after the October Revolution to live in Switzerland, intending to return when the Bolsheviks collapsed.

Of course, the Bolsheviks didn’t collapse, and the Malikovs soon frittered all their money away. By the time Annika was born, they were penniless.

When the rest of her family died in mysterious circumstances, Annika — then just a teenage girl — took matters into her own hands. She returned to Moscow, determined to re-make her fortune by any means necessary. She doesn’t talk about what happened, exactly, but it didn’t take long for her to turn to a life of crime. 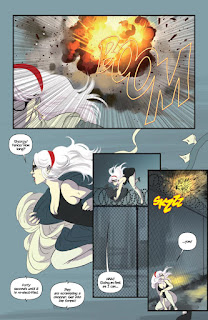 She adopted the nickname BABOUSHKA, became a gang boss in the Russian mafiya, and quickly built a criminal empire.

(Exactly why she took the term for “grandmother” as her nickname is a whole other story, by the way.)

Baboushka was soon a renowned crime lord, a ruthless killer feared throughout Moscow… until the other mafiya bosses joined forces against her, and forced her to flee the country with her second-in-command, Gyorgy Gyorgyov.

They wound up in the USA under their civilian names, claiming political asylum. That was three years ago, and they’ve been keeping their heads down, laying low the whole time. Until now…

Annika isn’t based on anyone in particular, but is definitely inspired by those historical characters I mentioned before, and more modern female action characters like Black Widow and Misty Knight.


TFQ: For this story you have teamed up with Thai artist Shari Chankhamma who many of also remember from your other Image series The Fuse. What made you decide to do another collaboration with Chankhamma?

Antony: Well, most people only know Shari as an amazing colourist, from her work on THE FUSE and SHELTERED. But she’s also an awesome artist, with graphic novels and web strips to her name.

Shari’s work is modern and energetic, a mixture of manga influences and American storytelling that comes from her unusual background; she’s Thai, but she reads, loves, and works in the US market.

She has a great eye for character, draws some downright sexy women *and* men, plus — because she’s such a great colourist — readers are getting a full-on Shari art experience, from layouts through to final colours. It looks fantastic. 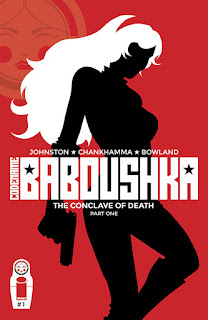 TFQ: Is Baboushka intended to be an long-run, on-going series like Wasteland for instance?

Antony: “The Conclave of Death” is Baboushka's first ‘mission’, running for five issues.

Her second mission, “Ghost Station Zero”, will follow some time in 2016, though right now we’re not setting a final date. We’ll see how everyone’s schedule looks.

Long-term, we want to release at least one new mission each year. The stories will build on each other, telling Baboushka's continuing adventures, but they'll stand alone well enough that people can pick up any mission and read it, without needing to know the others.

It'll be like getting a new spy movie every year ;)


TFQ: Something that always shocks me with comic book writers, is how many plots and characters you're able to write simultaneously. It must take a very organized mind to write so many concurrently running comics. How do you keep it all straight?

Antony: It’s all about compartmentalizing, really. Even before I started writing professionally, I was always doing several things at once; running multiple role-playing campaigns, playing in bands, writing fiction, building my design career… I think the urge comes naturally.

Of course, that doesn’t mean that *doing* all that stuff comes naturally, at all, and I do have to be pretty organized with my time and schedule — especially now you can add “making podcasts” to that list!

But the solution, for me, is quite lo-fi and simple. I make a lot of notes, I write *everything* down so I won’t forget it, and my calendar kind of rules my life. But that’s what enables me to do a bunch of different stuff, so I’m fine with it.


TFQ: The main characters are from Russia. I get the impression you know a lot about Russia and it's people. Have you lived there or did you simply conduct a lot of research?

Antony: I’ve never had the chance to visit Russia, let alone live there, though I do hope to. Mainly it’s a combination of research and social folklore; Russia fascinates me in many ways — as a political entity, as a culture, as a military power, and of course as our Great Enemy during the Cold War.


That said, I’m not trying to write social analysis or a political treatise, here. I use Russia, both in CODENAME BABOUSHKA and THE FUSE, as background and flavour to inform characters and events around them. Russia is still a pretty exotic and misunderstood place to many people in the west, and that’s very useful. After all, I’m writing adventure fiction, not a history book…! 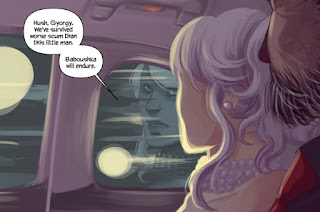 PREORDER YOUR COPY OF CODENAME BABOUSHKA NOW WITH THESE DIAMOND CODES : Cover A (Chankhamma) AUG150479, Cover B (Lotay) AUG150480
Posted by The Frog Queen at 5:06 AM