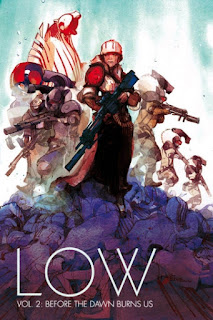 I suspect that I should write about the current series I'm reading in a way that says "here's what I think of the series to date". As you know I've been a little sick this month so I got behind in my reading. Last night I caught up on Low.

If you are not familiar, Low is an underwater science fiction opera which follows the trials of the last survivors of mankind. We follow Stel Caine who clings to the hope that probes sent to land above sea will find a hospital environment for mankind so that they can ascend from the ocean and live on land once again.

The ocean on Earth is full of all kinds of mutations. Humanity has attempted to coexist with different species of mer people. The story is written by comic giant Rick Remender who's work I've been a large fan of now for some time. I never seem to hear much about this series however. No one is raving in my ear about it yet it remains one of my favorite series to date. Within less than twelve comics, this story has managed to introduce a myriad of characters, complex and diverse, who have changed and developed through different times, and environments. Remender has created a complex underwater world where different civilizations have been established with different laws, cultures and levels of civility. I really love this whole barbaric underwater world.

I'm a big fan of the surviving characters to date. Well most of them and Remender has managed to introduce some fairly interesting characters along the way. The entire series to date has been illustrated by Greg Tocchini with some contributions later by Dave McCaig who's style is nearly. Greg Tocchini's style is very much up my alley and had originally sold me on the series entirely.

If you are looking for a well established science fiction series by two masters, I seriously suggest this story. And even more to the credit of the book, I really enjoy the female characters which isn't something that happens all too often for me with male writers lol for a lot of reasons I'll rant about elsewhere. You can currently grab Volume 1 at the awesome introductory Image series price of 10 bucks. Volume two comes out November 11th and will of course be slightly more expensive. However it is well worth it and you won't be able to predict just how crazy this world will get with each issue. Love it.
Posted by The Frog Queen at 3:58 AM