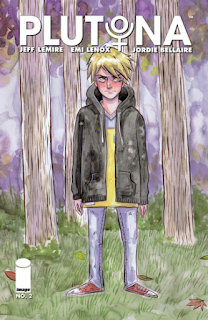 There's something magnificent about a comic book opening up with a bunch of kids gathered around a superhero's dead body, discussing whether they should bury her, and how they should do it. That holds my attention. I can't think of another comic where this particular scenario took place. Not that I need something to be totally new and never seen before in order to be worthy of praise. Yet I honestly can't think of another book where this has happened. That being said, I haven't read EVERYTHING.

Let me say how much I love the artwork. I really do. I think it's adorable while maintaining a graceful edginess needed to tell such a tale. I think it's pretty clear I'm not the biggest fan of perfectly photoshopped panels. It's one of the reasons I don't read more X-Men comics.

I was really worried about this series. I wanted the second issue to be as awesome as the first. I wanted it to keep establishing these amazing atmospheres. It did! A personal favorite is the speech bubbleless panels at the end which shows each child at home dealing with their reactions to the event that had unfolded in the forest. They must not let on they know anything to their parents. Each child dealing with their home situation in a different way. It's almost haunting to see which is how the children must feel with their new secret pact- haunted. 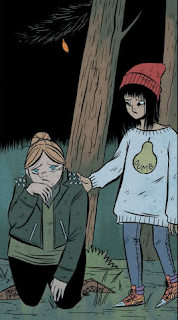 I know I said a bunch of stuff in my review of Paper Girls that perhaps a lot of people didn't want to hear or perhaps they didn't like. I know I praised Plutona, a couple times. So I thought I'd talk about the second issue a little... for instance I like this series so much that if I got to go to NYCC like everybody else I know, then I would have totally cosplayed Mie!

She's adorable!! I mean all the characters are adorable but I mostly just want an excuse to make the shirt. Fuck it, I'm making the shirt anyway. PEAR T-SHIRT!!  I NEED IT!! And I get to wear a tuque so it's really perfect for me. Maybe I can pull it off before Hal-Con. Who knows.

A little icing on the cake with this series is the little mini story at the back illustrated by Jeff Lemire which details Plutona's last adventure. We get a couple pages of this back-up story every issues that gets us a little closer to just what happened to Plutona. I'm in love. :D
Posted by The Frog Queen at 4:26 AM