The Wrenchies by Farel Dalrymple 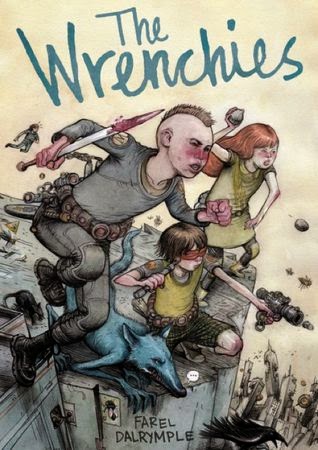 I was going to write about this ages ago but I get so bogged down in weekly singles, random submissions, timely interviews, not to mention my back log of older books that escaped my wallet back in the day.. honestly sometimes I just have trouble keeping up. So I'm finally taking to the time write something on this book.

What an odd little book! I really had no idea what to expect from the plot. I knew it had to be off the wall if Farel's previous work was an indicator. You may know his work best from the Image Comics Prophet series. He has stepped in and done a few issues for the series since conception. His rendition of the creepy white ghost girl is particularly amazing. He also did several Prophet covers which I cannot forget. I first discovered him when he illustrated a mini series for Marvel called Omega the Unknown. I remember seeing it on the shelf and the artwork blew me away. I was so utterly drawn to it. I didn't even care what the story was about at the time.

Currently, Farel is traveling for book signings all over the U.S. There is a giant list of locations and dates on his website fareldalrymple.com/. I'd kill to get some shit signed but you know me, I'm stuck out here on the Canadian East Coast.

The Wrenchies starts out spooky, ultimately due to Farel's illustrations. The story travels through dimensions and details the ordeal of the future children of Earth. They struggle to survive, fighting what are known as the Shadowmen. Like zombies, any contact with the Shadowmen is infectious and the teenagers become them. However the story becomes more than just your average post apocalyptic science fiction when the boy Hollis is transported to the dimension where the Wrenchies live. The Wrenchies are actually a rag-tag group of kids and teens who battle the shadowmen. There are several of these gangs. They all join forces with the Scientist and attempt to put an end to the Shadowmen. The eerie and surreal origins of which will shock you.

It seems important and appropriate that I let you know the book contains violence and language that is generally not deemed appropriate for children. Perhaps it is suitable for young adults over the age of 12 or 13. I suppose it depends on what you chose to expose your kids to. It's certainly would have been fine for me to read at 13. The violence is of particular interest. Most tv shows with warrior-like children lack violence and their battles consist of boobie traps and Chris Columbus ploys (think Home Alone & Hook). Farel opts for gruesome beheading, amputated limbs and the squashing of puss-filled monster bugs. However, the violence is more-so a part of life for The Wrenchies. The climactic ending is not all-out blood and gore.

Many readers found this story a little slow in the middle but the middle of the book had the amazing story of Hollis! The little boy who's life is ultimately lonely and quite sad until he is transported to the dimension of The Wrenchies. It's worth noting that the bloody action does not carry on through the entirety of the book and perhaps that lack of gorey action can bore some readers who do not enjoy character development. Bottom line, The Wrenchies is a Goonies acid trip and you will not soon be forgetting it.