The Shadows of Salamanca 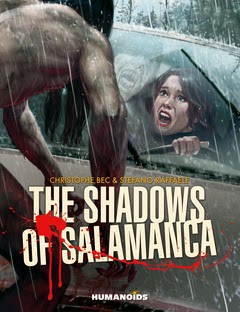 My readers, you must know by now that I love my horror. A month ago I was gushing on facebook about how excited I was to read The Shadows of Salamanca, to be released by Humanoids. They sent me a copy promptly and I've been waiting until release week to write about this haunting tale. The book hits the shelves November 12th to send shivers down your back using a similar vein as the tales of the wendigo.

Different than most gory horror stories, The Shadows of Salamanca only hints at the supernatural. Even the monsters of this story are leaving you wondering: are they organic Earthly inhabitants like sasquatch or big foot?  Or are they the demons the religious claim them to be?

Young couple Sarah and David move to Salamanca to escape busy urban life but Sarah isn't entirely certain of the move. For one thing, there is something very strange about the rural town. It is utterly devoid of children coupled with an aging population. Kinda sounds like what is slowly happening to Nova Scotia but Christophe Bec isn't writing our future. He did manage to create a new spin on rural American legend. Most of us are familiar with the legend of the wendigo, or mutants from nuclear test sites in the Nevada desert. This is a refreshing look on the traditional American monster story and the images will chill you. Stefano Raffaele moves seamlessly from panels depicting ordinary American life to that of nightmarish savagery. If Stephen King isn't doing it for you and Darkhorse horror isn't floating your boat right now, you have to grab this one! You won't be disappointed, the ending is killer.
Posted by The Frog Queen at 5:33 AM