Exclusive Interview with the Creators of Neverboy! 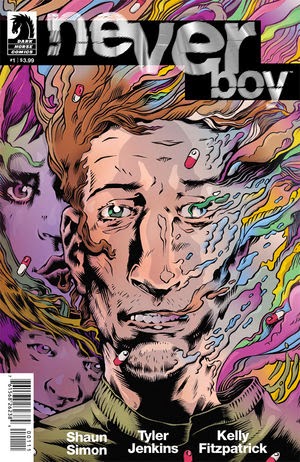 Recent Darkhorse mini series caught me offguard. I had not heard much about it's release until the week before. I was going over my pull list to see this curiously named creature of a title. Neverboy begged some googling and as soon as I caught sight of the cover I knew I had to read this book. Artist Tyler Jenkins (Peter Panzerfaust) and writer Shaun Simon (Killjoys co-creator) team up to bring you a psychedelic journey across the boarders of reality. Former imaginary friend Neverboy has joined ou reality and made a life for himself. However he can only keep his grip on our world as long as he takes our drugs, be it whatever he can get his hands on. Things start to slip when the drugs run out and reality fades.

I was so personally taken with the beauty of this initial issue that I decided to contact Tyler and Shaun. Both of them gave me some insight into this fantastic world and their process.

TFQ: First off, can you tell me how you teamed up with artist Tyler Jenkins for this project?

Shaun: I had an idea of the art style we needed for the book but didn't have an artist in mind. Sierra, our editor, was sending me lists of great artists and right around this time my brother in law told me to check out this book, Peter Panzerfaust. Tyler's art stuck out to me. He has these thins lines that makes the characters look fragile. I got in touch with him and told him about the project and he was interested.

How did you come up with the concepts behind Neverboy? Has the story been brewing in your head a long time?

Shaun: It started with the question, "what happens to an imaginary friend if the child who created him dies?" I came up with the name and started figuring out who this character was. A book like this can easily wander off into the surreal and I wanted to keep it, Neverboy's story, grounded in the real world. The surreal stuff has more of an impact when it's used sparingly.

It has been in my head for a long time in various incarnations. At one point he was part of a group of people like him but his story always stuck out. I felt it needed to be told on its own.

TFQ: How deep into fantasy will Neverboy take us? What can we expect to get into here?

Shaun: Every issue has fantastical elements to it but, like I said, I didn't want to overdue it and get away from Neverboy's story.

In issue 2 we meet Neverboy's counterpart. Julian Drag is an artist turned taxi driver struggling to find inspiration. He's having a seriously bad day and about to do something about it when a certain imaginary friend comes crashing into his life.

TFQ: Can you tell me how you developed the look and feel of Neverboy, especially when things get surreal towards the end!

Tyler: This is a hard question to answer. I don’t have a specific process for developing the look of things. In these instances, I knew where we had to go with it and then I “research”. Basically this means looking at cool stuff, stuff that may be semi related, and just feeling my way. With the color waves: oil spills, oceans, waves, drowning, exploding fish tanks, etc ,etc. Nothing specific but all informing the feel of things. and then just drawing until it works out. 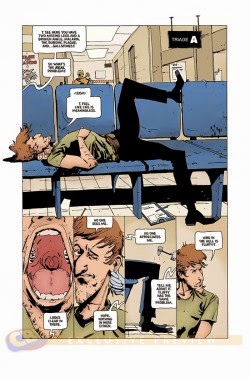 TFQ: Can you tell me a bit about what artists or pieces have influenced your artist style?

Tyler: I have a list of artists that have inspired and informed me. They evolve continually and are different year to year. but some reoccurring, even constant, inspirations: and I would say these are the ones I would say my style is most informed by:

Guy Davis (his Marquis is masterful)

This is maybe the short list, but there are tons of other artist I am inspired by and regularity look at.

TFQ: How does working on Neverboy differ from some of your previous work like PeterPanzerfaust ? Do you take a completely different approach to each book or is the process similar?

Tyler: The process is similar, actually. I thumbnail out the page in small, maybe 1/4 size. Then I lay out the panels on the final are board and pencil it. I pencil super super rough. sometimes just circles for heads, and then Ink it. doing most of the work and detailing with the ink. To paraphrase something Guerra said in an interview: I use the pencil to organize the page only. then draw it with the ink.
Posted by The Frog Queen at 4:15 AM