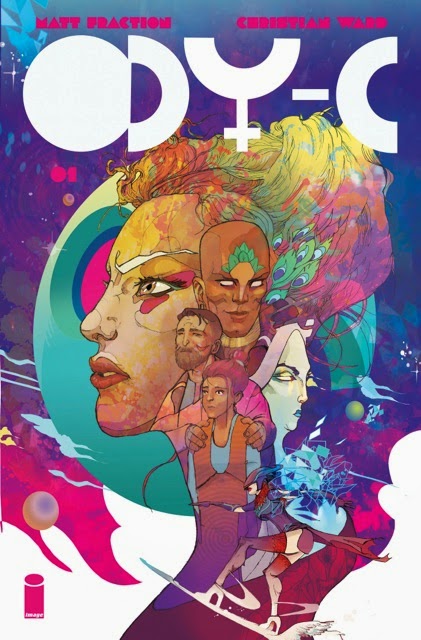 This brand new title is being released today by Image. It is written by Matt Fraction and illustrated by Christian Ward. I've been an on and off Fraction fan. After all, he's responsible for giving me (and yes you) the current run of Hawkeye which rocks. He's also responsible for Sex Criminals. Everyone and their comic critical dog likes that one.
Yet I don't think this is the right story for him. Here's the rundown: so this gender swap (sort of) story is inspired by the Oddessy but takes place in space, on a C shaped ship called ODY-C. Everything has potential...sigh.

Believe it or not, I was actually excited about this title when Image first released it to the press. Despite having some beautiful panels, particularly the one with the astral horses, there is a real lack of story for me. The issue is largely narrated with clumsy prose. I generally dislike not being able to get to know the characters through there own speech bubble. These warrior goddesses seem to lumber in persona only- as a dominatrix type mistress, they pull their male gimp along behind them in the opening scene. I suppose that will help get someone's rocks off.

I like psychedelic and I do like a large amount of the artwork in this issue, but it doesn't begin to find a place in my favor until the mid point of the story when there is finally a few speech bubbles.

"Swimsleeping women who power the ship think of ten horses at once." It is sentences like these that make my brain bleed. I mean, I get it but I don't like it and I hate made up words. Well okay, I hate this made up word -swimsleeping. "Everyone knows it's called aqua napping... come on!" my boyfriend commented while reading over my shoulder as I type. Aqua napping, that's gotta be a thing. I bet that's a thing somewhere at a day spa.

I'm sorry but for me, this one is a miss despite how I enjoyed the artwork. Unfortunately I think that many people will be blinded by all the bright colors and say it's a win. It's not a win for me. Hopefully Fraction doesn't hate me now because I really do like so much of his work.
Posted by The Frog Queen at 4:06 AM