Before The Incal by Alexandro Jodorowsky & Zoran Janjetov 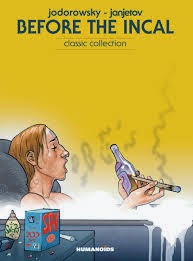 I was having some issues deciding on whether or not I should write anything about Jodorowsky's work. Mostly because he's written so much and I have yet to read it all. I think most of his fans have yet to read it all. Lately, I've been grabbing everything I see that has his name on it. Recently, Humanoids had release another printing of  prequel Before the Incal. It followed the millionth (not literally) printing of The Incal which was releases back in September of this year (and still currently available for purchase!). What you don't know about The Incal could hurt you. As in, if you haven't read it and you're into comics, then you are missing out on something prolific. Something that will change forever, how you look at your comic book collection. So let me explain why by giving you a little info on the series.

The original Incal story is currently published by Humanoids under the title The Incal. It is a science fiction story written by Jodorowsky, fully illustrated by Moebius and originally published in 1981. Subsequently, versions have been printed in which the amazing work of Moebius was re-colored because a certain publisher thought it needed modernization..let us not speak of such atrocities and blaspheme. The story itself has inspired other science fiction writers and even film makers. You may recognize some bits of the book in this way: "Hey, remember that movie The Fifth Element? This kinda looks like that." That's because director Luc Besson took direct vision and "inspiration" from the book. He was actually sued by Jodorowsky and Moebius. They lost their case because I can only imagine that courts don't care about the intellectual property within comics unless it was published by Marvel. Or maybe when that Shia LaBeouf kid steals an entire graphic novel from Daniel Clowes and turns it into a movie without asking? At any rate, that's a brief history of the original story without giving away any kind of plot details. 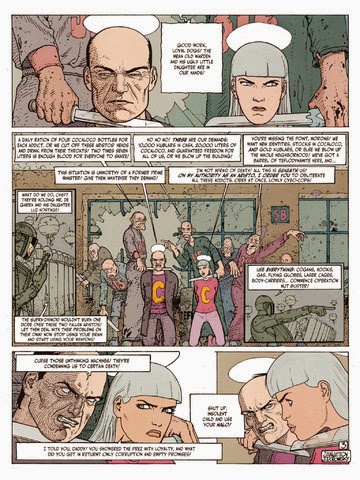 In 1988 Jodorowsky published the first book in the prequel story Before the Incal. He hand picked Janjetov to illustrate the story claiming that Janjetov's artistic style was the most like Moebius' work. In the back of the currently released edition of Before the Incal, there is an awesome interview with Janjetov detailing this and his experience with Jodorowsky. It's one of the things that I love about the Humanoids publications. In all the ways that publishers have defiled the series over the years with censorship, poor translation and recoloring, Humanoids manages to keep the original story intact and include nice little bits at the end, like the interview with Janjetov.

As the title suggests, the book details the events that John Difool encounters before he gets involved with the Incal, a crystal of great power. There are certain points in this particular book which quickly endeared me to it. I originally didn't think I would enjoy the book. Jodorowsky may have insisted that Janjetov's work was most like Moebius but there really is only one Moebius. I didn't want to see any imitation. It was while reading the book that I came to love Janjetov's unique style. He really is not a Moebius impersonator at all and his work is full of charm. The way he drew the young John Difool could not have been any more perfect. It's one of the things that made me fall in love with the book.  There's a closer look at John Difool and who he was. Who was he? The son of prostitute in the lower rings of a dystopian city. He was fragile, emotional and compassionate which is quite different from the grown up Difool who's miserable, addicted to homeo-whores and visky. Which brings me to an important point - language. 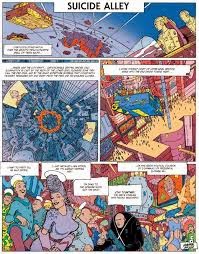 For a lot of people it can be difficult to overcome the use of misogynistic language in Jodorowsky's work. The universe in which The Incal takes place, also known as the Jodoverse to fans, is a nasty place full of horrors. There's a complete lack of social justice. People are depraved and deprived (sound familiar? not too different from our current world). Prostitutes are called whores and looked down on society, and women in general are second class regardless if they are aristocratic. So please do not immediately feel as though the book is sexist based on the language used. I believe it's meant to bug you. It's supposed to provoke you because it is an unjust universe where people are treated unfairly and the general public has become desensitized to the conditions. After all, this is a world that regularly condones and recommends suicide to regulate both it's population size and morale.

So have I convinced you yet? I guess the big question is, HAVE YOU READ THE INCAL?

Email ThisBlogThis!Share to TwitterShare to FacebookShare to Pinterest
Labels: Alexandro Jodorowsky, Before the Incal, The Incal, Zoran Janjetov