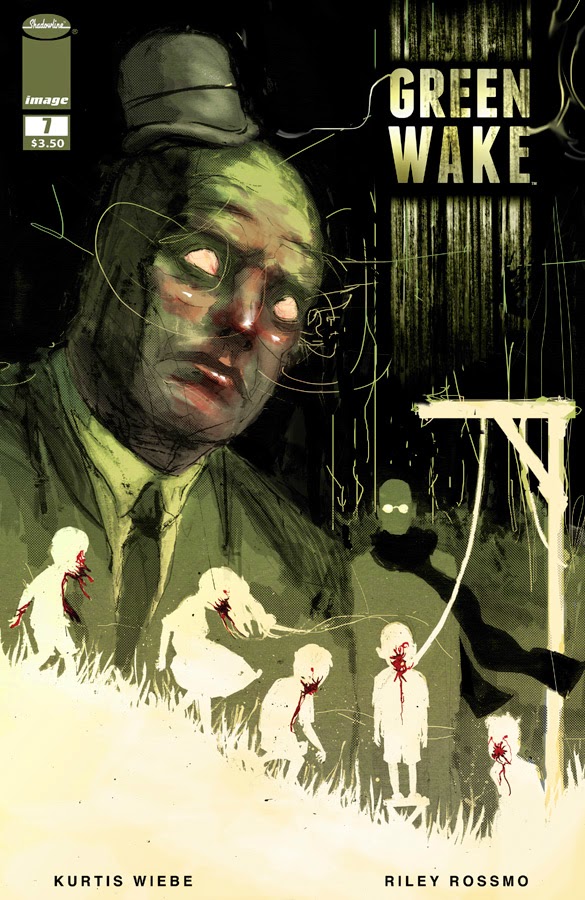 As something a little new and different, I thought it would a nice idea to do articles highlighting Canadian artists and writers because TADA! I'm Canadian. Lately, I have been seeing and hearing a lot about this dude named Riley Rossmo. About a year ago I stumbled on this book called Seven Sons (article here).

I was blown away by both the story and the incredible illustrations. It has a special place in trade paper collection. Yet after that, I started seeing his name all over the comic book shelves. He has such a unique and distinct artistic voice, that his covers catch my eye and quickly identifiable as Rossmo. I decided that I had to contact Riley about his success and he was graciously willing to respond.

A little background: Rossmo is a graduate of the Alberta College of Art and Design. During his career he has worked on comics with Marvel, Image and Boom Studios. My personal favorite being the 2006 release of Seven Sons on AiT/Planet Lar but that being one of his very first projects. So without my blabbering on and on let's hear from the man himself.

TFQ: As a Canadian Artist, did you find there were any hurdles to overcome to break into the industry at large?

RR: When I was getting started,  portfolio reviews at cons and hard copy submissions to editors were the best way to get your work reviewed, in my opinion. So I spent a lot of time at Kinkos making copies of my work to submit to editors. The only draw back to being  in Canada at that point in time seemed to be that there weren't a lot of conventions in Canada to meet publishers or editors at.  Email and social media have made it a lot easier to connect with editors.

TFQ: Lately, I've seen your cover art work on a range of comics from different writers and artists. How do you feel about doing variant covers?

RR: Doing cover are a nice break in my work week. Doing covers for a variety of books has allowed me to explore different themes, techniques and forms I wouldn't normally explore in my own work. Books like Samurai jack, GI Joe, or Robocop are a little outside my wheel house but working on covers for books like that force me to work outside what I’m normally comfortable with.  They've really helped me grow as an artist.

TFQ: What remains your favorite project of you entire career to date?

RR: That’s tough, What ever the newest thing I’m drawing is always what I think looks best, I have a soft spot for the characters in Proof, Green Wake was an artistic breakthrough, and Drumhellar has my best art. Adventures of Superman was kind a big deal for me mostly because its something that my extended family can relate to. Sometimes its hard to explain what I do to people with out some knowledge of non-superhero comics.

TFQ: Where do you want your career to take you next?

RR: I'm not sure. I have a new project coming out this fall and some other irons in the fire. I just hope to be able to make comics for a long time. I’m very, very lucky to have the career I do.

TFQ: What advice, if any, can you give aspiring Canadian artists about getting started in the comic book industry?

RR: The best way to get in to comics in my opinion is to make comics.  Mini comics, web comics, self publish stuff. I think making 10-20 page comics is the best way to show editors you can tell a story. It also gives you something substantial to show other creators at shows.  Really it comes down to putting in the time and being critical of your own work so you can improve.