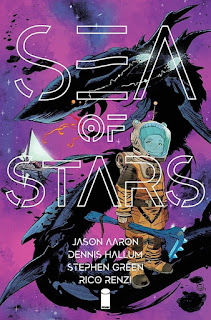 I liked the cover, what can I say? That's the only reason I decided to read SEA OF STARS. That and the fact that it's a science fiction story. I figured this was an all ages series but Image Comics tells me that this is in fact, rated T for Teen. There's some implied profanity, meaning characters will start to swear only to be cut-off by events or other characters speaking. The violence is minimal and not gory so... I sort of feel like T for Teen is a little extreme. Or maybe it's the content to come that forced the rating?

So anyway this kid Kadyn, who's dad (Gill) drives an intergalactic space rig, is ferrying some museum pieces to a new location which is both not important and something I can't remember. Wouldn't you know it, their path is intercepted by a space beast and their ship is torn asunder. The two are separated turning Kadyn into a child is lost. Gill expends all his energy trying to find him and Kadyn seems to have found some SPACE MAGIC (how many drinks is that?). He also found some cute little space creatures who are more or less there for comic relief except, they're not very funny to me. Maybe it's more teen humor? Going back to the rating thing, seriously how uptight ARE parents these days? Why wouldn't you let a 10 year old read this comic? These creatures are so cute. They do say very cutesy things like "just to be clear, we're still going to eat it right?" as they refer to Kadyn who had apparently ZERO fear of the beasts (maybe cause they're cute).

It's here where I gotta say that the artwork, and that includes the beautiful coloring job, is an absolutely perfect match for this story. This lighthearted adventure is full of colorful panels with rich blues and purples. It really does earn its title Sea of Stars in more than one way. Not just with the space whales and quarksharks but Kadyn's new found ability to "swim" through space in a broken space suit unharmed but the colors! They do make one think of the ocean.

The big mystery of this story is regarding this magical power Kardyn accidentally picked up. Being able to fly through open space unprotected isn't really normal for a human child. I won't spoil it for you, you'll just have to read the book but I do feel that this space magic (final drink) adventure is suitable for children 10 and up. Maybe some wiggle room in there if you're not a particularly uptight parent.

SEA OF STARS is a beautiful  comic book so add some space magic to your pull list this month.