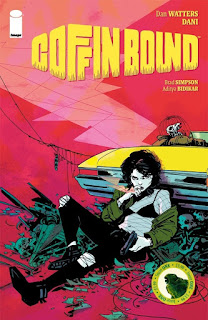 I guess it's been a while since I've actually sat down and written an article about a comic rather than a video script. Let's try and get back in the habit shall we?

Lately I've been all over the various genres. Trying hard to keep up with my favorites and the never ending potential I see coming out every month. There really are so many great comics coming out these days and are people even talking about them? I'm really not sure they are. I will once again make an effort to write a separate article for each one. I wish I felt comfortable just throwing out any old article into the wilds of the internet. I do not. I always want to re-read and fix every sentence and I'm trying to let go of that because simply, nothing gets produced.

So today I read Coffin Bound #1. You can get your copy this week, August 7th no less at a comic book shop near you. I received an advanced copy from Image Comics and opened it up to be both stunned and intrigued by the artwork. Gothic and edgy, that's right up my alley. Throw some supernatural oddities in there and you've pretty much got the blueprint for a Frog Queen Favorite (which by the way I've been childishly hashtagging all over Instagram).

Coffin Bound is written by Dan Watters, London-based writer who's written some DC and vertigo titles like LUCIFER, HOUSE OF WHISPERS. Currently he's writing LIMBO with Image and DEEP ROOTS for the ever ambitious Vault Comics. He's got an active Twitter page you should follow because someone so busy writing should have more followers.

The artwork in Coffin Bound which makes my heart pound (rhyme unintentional but completely invited) is by an artist only known as DaNi who I'm sad to say I don't know more about. She has an active Facebook page and worked on titles for DC such as THE DREAMING. I suggest following her on Instagram as well for updates and artwork. She's auto-fallen into my list of favorite artists of 2019.

Okay let's move on from the gossip and take a look at this grotesquely brilliant piece of work. I dunno what I like more, honestly, the pencils of the colors, which by the way were done by colorist Brad Simpson who is left off the side credit of Image Comic page but written about in the books bio (weird). Regardless each page feels like a frame-able piece for my wall. If this wasn't an advanced review, I would be sharing panels left, right and center. You're just going to have to run out and grab a copy Wednesday to check it out.

I'm not sure how to describe this story. Izzy Tyburn is our gorgeous 90s trash goddess. She can handle herself and you get the feeling right away that she's deadly. From the get-go she's in deep shit with some baddies hot on her trail but receiving help (if you can call it that?) from a bizarre humanoid vulture character. I think I was taken in by the comic right then. I mean, there wasn't much chance of it doing anything wrong and then it threw in some horror strippers and sealed the deal on my opinion. Outrageous fun. The whole thing does feel very Grindhouse but Grindhouse type film based in the Hellblazer universe.

I have to say I really like the old English used in the story. The characters are bizarre and interesting although I really wish this was an extended issue so I could get to know them a bit better. There is this terrifying character known as the Eartheater. What a fantastic name and he has wonderful, sort of romantic figures of speech for what he does, which is essentially murder. Like "I, Psychopomp, sew the Earth. Reuniter of man and mud." Isn't that lovely?  I guess he's a sort of supernatural bounty hunter.

There's a lot going on and unfortunately I didn't get a real strong sense of what that is in the first issue. It's my only real complaint. I think it's all brilliant and highly engaging but I would have liked a few more pages in the first issue. I do feel (and I've said this often), that many stories just shouldn't be serialized and rather make better OGN releases. I'm not saying that Coffin Bound fits in this category but I think my meager brain needs a little bit more info in an initial issue. I want to get a really clear cut sense of what's going on and who the characters are. Mystery is paramount! My brain must wonder what will happen. I just don't really understand the motivations of any of the characters besides Izzy and Vulture and that's sort of annoying to me. Of course it should be clear in upcoming issues but it is an important asset for me as a reader in determining whether I continue to read. I want to be enthralled by mystery but not lost on the plot.

Okay I think that's enough from me. I am excited to see where this goes. I will likely cover this in a video after it's debut so I can share the art but until then, add this one to your list. I feel this one needs to really be talked about. I think it's going to be too much fun.
Posted by The Frog Queen at 7:23 AM