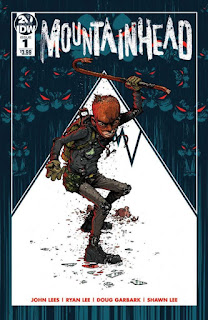 MOUNTAINHEAD #1 was just released by IDW. The story hinges on young Abraham Stubbs who's living on the run, breaking into houses with his paranoid father Noah. He's convinced that the government will come take him away, and he will be punished for his non-conformity. Why did I decide to read this comic? I liked the cover.

This comic is written by John Lees who's work I'm familiar with. I read And Then Emily Was Gone some time ago. I can't say I'm as familiar with the work of Ryan Lees who, I dunno, is maybe related to John? But Ryan has worked for Valiant and Marvel in the past.

So SPOILER WARNING. Just a couple pages in Abraham and his father are apprehended and the police tell Abraham that in fact, he's not Noah's son. Noah stole him from a house over a decade ago. They located his parents using DNA match and well, shipped him right off back to the biological parents. I'm really good at suspended disbelief. I am really good at ignoring reality. That's why I read to begin with but there were a few things that just seemed silly and nonsensical. Beyond the quick DNA match and located parents, it was the way the news was just given to the kid and he's just dumped in this new family home without any tools to deal with the whole business. The parents apparently were also not prepared as the mother doesn't exactly say the right things to the boy.

I mean, I feel like she should expect him to be out of sorts and instead she throws the reality that he clearly hasn't fully dealt with, right in his face. Not exactly sensitive Mom.

As far as the art is concerned, I can't say that I'm a big fan of the character design but there are some really fantastic scenic panels. I particularly like the way the mountains are illustrated. Yet a lot of the comic promotes a very grotesque atmosphere. This really does set the tone for how our young protagonist Abraham feels about his surroundings. Further to this, he's often caught picturing monsters in the shadows around him. A decade of learning from a paranoid man like Noah will do that I suppose and children are highly suggestible of course. 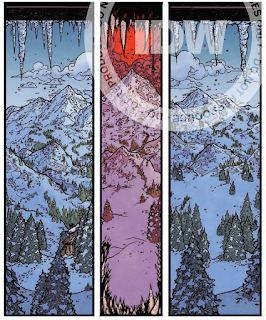 This comic is classified by IDW as a psychological thriller horror story and that seems fairly accurate. The supernatural looking figures do appear to Abraham's mind playing tricks on him rather than some evil doom coming from a hell dimension. It's unclear to me right now as to whether this story is about a traumatized child adjusting to a normal life with a normal loving family, or if there is a whole other plot about to hit. Abraham's family lives in a remote mountainous area of British Columbia and right before issue #1 ends, a half naked local stumbles out of the woods mysteriously injured and incomprehensible. So just what is going on?? I honestly can't say. All we're sure of is that Abraham has no intention of settling into his new home.

MOUNTAINHEAD is a 5 issue series and you can expect issue 2 to be out in late September.
Posted by The Frog Queen at 6:51 AM