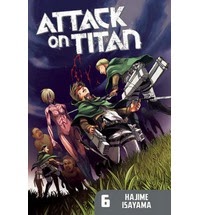 This is getting very confusing.. Female Titan?? no wait, female-esq Titan that is being controlled by a human being?? Let's see them explain this one. As long as it's explained by magic, mysticism or some other such nonsense, I will be happy.

One detail worth noting is the lack of romantic side plot in the series. Sure, a lot of people might see something happening in the future regarding the relationship shared between Eren and Mikasa. However, I see their bond as a deep sense of loyalty resulting from a childhood of trauma and mistrust of others. When adults couldn't be trusted, Eren and Mikasa found trust in each other and it stabilized their world. I don't think that the author wishes to construe this unique friendship as romantic. At the very least I hope he leaves a romantic relationships out of the story entirely. The future of Attack on Titan? If anything, I suspect Mikasa of being able to transform into the lady Titan but that does wrap everything up in especially neat package and I have never been a fan of such things. Too convenient. I have thrown books across the room for less.

If you think about it, Mikasa and Eren would make a terrible couple. Mikasa is always slapping people for their terrible behavior and Eren is generally erratic and poorly behaved. Unless they intend to implement some dom/sub 24/7 regime, I would see the relationship quickly going south and the two will be a pair of unhappy drunks slapping each other about. Of course, I don't think law behind the walls have any concern over domestic abuse with the threat of Titan looming everywhere about. The two certainly would not be receiving any help from counselors, AA or law enforcement when Mikasa smacks puny Eren into oblivion. Unless of course he turns into a Titan and kills her and everyone else during a drunken brawl. Nope, I do not think romance between these two is good for the story at all. hmm... this all got very real and dark. Moving on.... Volume 7 tonight!