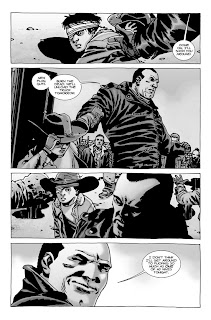 Anyway, I'm all caught up for now. Wow. They left a few cliff hangers in the issues, like always. You will not be disappointed with these 4 issues. They are fantastic. I do really like the protagonist in this storyline. Negan is an awesome nonsensical character. I shouldn't say nonsensical. He does have an agenda, a self-ish one but to me, that's pretty nonsensical. He's out for himself and he's taking advantage of a whole lot of good people.. yeah so.. he's a socio-path? Okay, socio-paths make the best villains because you can't reason with them. Even though it appears Rick is trying to reason with Negan, he has a calculated plan to take the mother-fucker down. I love how the writer makes use of Rick's son in these issues. He drives the story on while providing riveting action! Man... wish I could write like that! I don't want to spoil anything.. I hate spoilers so for the most part, I try to abstain or give fair warning.
Posted by The Frog Queen at 4:12 PM