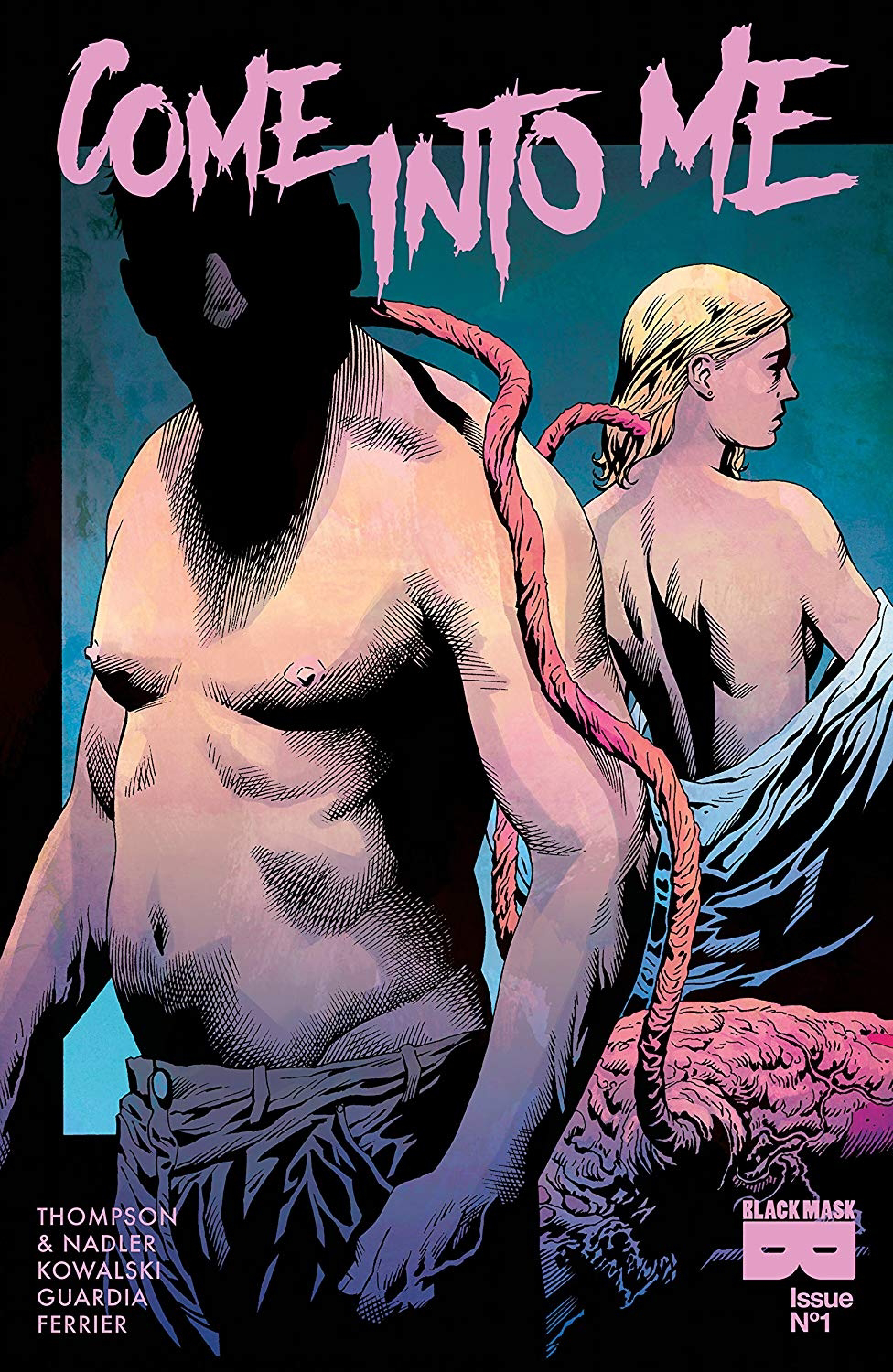 We finally got it! The trade for COME INTO ME has finally reached us and I finally got  my ending! I felt heavily helped around by this series and not because of the crazy psychological horror moments. This is one of those titles that had a delayed release schedule. Issue 2 landed in May and then we didn't see issue 3 till September. The damn thing slid right by me because Black Mask is horribly inconsistent with their press releases. And I still don't know what the fuck happened to issue 4.
This kind of thing really angers me because I'm trying hard to support amazing books but when the release schedule is delayed or non existent, it makes it so hard for fans to give creators the money they deserve. Okay, got that out of my system.
COME INTO ME is a psychologocal horror, bodygore, SciFi mashup and it's quite the ride. The writers of  comic series THE DREGGS got this series together and I have to say, this is way better than their previous works. The story follows a successful yet insecure scientist Sebastian. He is in the middle of acquiring investors for his device which is designed to allow ones conciseness to be transported into the body of another. The intent is to share experiences but the result is much more personal and invasive. As with all crazy science experiment stories, things go drastically wrong as humanity's abuse of technology (or lack of respect) has Sebastian in quite the bind. However none of it really goes down the way you imagine.
We're lucky that we are getting a trade and yes, Black Mask Studios is pretty good for putting them out. I think they've released a trade for nearly every series they've published. Anyway I got to read the series as a whole and man, this is the type of book that Cronenberg would make a killer movie out of. Or hey, maybe his son should take a crack at it. The device which connects two people into one brain, has this eXistenz look. It's a tenticle with a sharp on the end. It also kind of reminds me of Hellraiser 2 as well! You know, when the evil doctor becomes a cynobite?! He gets all these tenticles with sharp objects coming out of the ends. Sort of like terrible long tenticle penises. Total freakshow stuff. I love it.
As with any good horror however, the psychological horror endured is far more menacing. The story plays off the humiliation experienced by a lack of privacy, the loss of control over one's body (and life) and the horror of being in a body falling to pieces. Real mortal fears. Yet what really makes COME INTO ME a truly great book is that all the experiences our Sebastian goes through, are essentially amplified challenges faced by people today. We're surrounded by recording devices, our privacy is an illusion. For Sebastian however, his privacy is stolen and body virtually hijacked. His loneliness became his undoing. One moment he's trying to connect with cam girls on the internet and the next he's lost all his privacy and autonomy; his most intimate moments shared with a stranger.
The reality is that our loneliness often makes us succeptible to the ill intentions of others. Take online communication for instance, just by logging on, putting info about ourselves online, we leave ourselves vulnerable to theft, assault and more. Yet we do so anyway because we crave connection. This story takes things to the next level of vulnerability in the search for a connection to another human being and is brilliant fun. If you're in the mood for something a little out there, into bodygore and emotionally vulnerable characters with bad self image, this is the book for you. I think this is a fanatic book and I really wish they just released a trade and skipped the agonizing serialization.
Posted by The Frog Queen at 9:55 AM