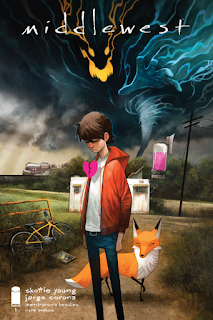 Hello Comic Book Junkies, it's the frog queen here and today I'm talking about Middlewest #1 by  Skottie Young and Jorge Corona which just came out from Image Comics.

I have actually been sharing images of this on Facebook for quite some time. So this is a pretty important comic for me in the sense that I've been really looking forward to it. I got my review copy this week and had to take the dive.

I do not think that I have ever read a comic that was written, but not illustrated, by Skottie Young. Yet having read I HATE FAIRY LAND, I know that we are in for something far from average. I don't think anyone more perfect could illustrate a story for Skottie Young. Jorge Corona's style is so perfect for anything whimsical. If you've been reading my blog for a few years you likely remember me gushing over Jorge Corona's comic series FEATHERS which was published by Archaia back in late 2015. You'll find that his art style has taken on a maturity to speak to an older audience than FEATHERS and the coloring will get to you.... right in the feels. Those gorgeous blues and purples makes my pupils dilate.


The story appears to take place in a kind of dimension similar to our Earth but with some eerie differences. For instance, everything appears to be powered by this glowing pink substance which is attached to motor vehicles, homes, etc. It almost resembles an IV drip and so I keep thinking that here's a child who's in a coma attached to some I.V. drip and talking to his spirit guide. Yes that cute little Fox on the cover is actually talking to our main character. Of course being a bit of symbolism junkie, I would assume from the cover that he is a terminal heart patient. But hey I could be entirely wrong and I'm just having fun making my own narrative. My whole made up synopsis works well with the fact that we are introduced to the main character Abel from the beginning of the comic, within his own nightmare. Or maybe the nightmare is just how he views his environment, the Middlewest. Hostile, uncontrollable and oppressive.

Abel has an abusive father whom he tries to please until he doesn't when his Fox friend urges him to neglect his responsibilities in favor of having some fun with his friends. And that's when the storm comes. This is a very mysterious story and I can't wait to see more.

MIDDLEWEST is an all new, on-going series with Image Comics and you can get issue #1 at your local comic book shop! You can get your copy of issue #2 on December 19th!

WATCH THE YOUTUBE VIDEO TO SEE MORE OF THE ART: