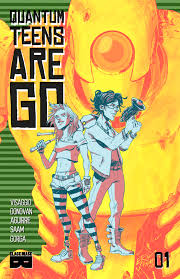 So here's something you might not be expecting. A series that really came out of left field. As in, I wasn't expecting this. Sure, it's impossible to expect anything specifically from BLACK MASK STUDIOS. They keep me on my toes when it comes to original content. Are you ready for this review? You're probably going to get mad.

So I was initially pretty excited to read this book. I liked the covers. Yes that is often how I judge a series. When you get a press release from a publisher it generally only has a couple cover images of the series. Occasionally, you'll get some preview pages but generally it's just the covers so I make a lot of assumptions RIGHT THERE and then I read the synopsis.

The synopsis of QUANTUM TEENS ARE GO is explained in a two pager at the beginning of the book which also gives two creatively written bio's on the creators. At any rate this is what Black Mask Studios had to say:

"Mad science is the punkest s*** there is. Teenage sweethearts Nat & Sumesh spend their nights breaking into abandoned superlabs to steal the parts they need to build a time machine - and they've just found the most important part. But mysterious entities keep trying to stop them turning it on. Now all they've gotta do is hang on long enough to figure out why. Magdalene Visaggio (Kim & Kim) and Eryk Donovan (Memetic) bring you a high-octane adventure full of robots, muscle cars, and queer-a** skater punks."
So I'm reading through the first issue and then I hit my ---first issue with the book. The main character is apparently trans which is great, at least I thought so because hey, diversity in comics is still a thing that needs to be addressed. In my opinion there isn't much diversity in comics at all. Sure we're starting to get characters who are people of color, gay, trans and other marginalized people but they're generally written by white men. At least this has been the current trend with the BIG TWO. I wanna see more diverse characters written by people who actually come from those diverse backgrounds. I wanna see more writers of color in comics, more gay people of comics, more trans people in comics, more women in comics. That to me is true diversity.

Anyway I got a little off track so lets get back to the review shall we? Here's my beef: There is absolutely no reason that the main character being trans in this story even matters. Maybe that's on purpose. Maybe merely throwing in there that she's trans is fine. Yet the way it's thrown in the first issue makes it feel horribly token-esque. It almost made me a little angry. It goes down like this:

There is this awkward exchange between the main character and her mother where he mother gives her some shit for being a rebellious teen. The mother uses her dead name and blames the rebellious behavior on being trans - she's obviously not winning the mom of the year award. Let's be frank here, I'm not saying that the fact that the character is trans is wrong, it's just that this is pretty much the only time it comes up and it's pretty damn stereotypical. I had this discussion with one of my friends the other day about how the focus on trans characters is so blatantly always about transitioning which is basically a very small part of ones life as a trans person. That being said I'm sure there are people out there that want to know a character is trans so they can feel some sort camaraderie with the character yet also not make the fact that someone is trans, the main plot line.

I'm not purposely trying to be nit-picky about how one fights for diversity in comics, but as a journalist I do think that it is within my right to address certain grievances. That's the point of reviews right? I dunno if Mags is a trans woman. It's really none of my business whether she is or not. It's not anyone's business but she does seem passionate about the rights of trans people which is a solid plus.

In fact her twitter is full of retweets making fun of SJW and referring to something off-putting about how trans women can not be lesbians because they don't date other trans women... which I know for a fact is just a sad and erroneous opinion since my ex is a trans woman who identifies as a lesbian and I have trans lesbian friends that are currently in long term relationships with other trans women. Perhaps Mags is retweeting these things to call attention to the silliness. I can only make assumptions and that's not something I like to do because you know what they say about assumptions...

So now that all that stuff, I actually got pretty bored throughout the book. Although I felt the ending of the trade as a whole was very good, I found myself rushing through the book because I wasn't really enjoying it. I didn't find the actual action and events of the story were terribly interesting and perhaps that's because I expected something else in a science fiction type book. I felt the world itself was too close to our current world to incorporate the time machine technology. It just didn't make a lot of sense. I'm generally the last person to have a problem suspending my disbelief but I just didn't there in this book.

That all said, I think it's definitely worth a read and I would like to hear what you thought of this book!