How Boring was SEX CRIMINALS? 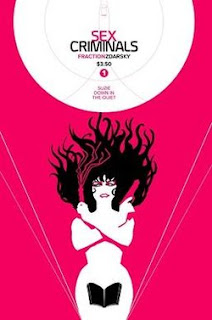 So I do this thing from time to time where I completely ignore books that have too much hype. That's what I did Matt Fraction and Chip Zdarsky's SEX CRIMINALS. When the series initially debuted, I completely ignored it. I saw the hype of course, that was difficult to ignore. I saw the very special amounts of money Image Comics was dedicating to advertising and special edition floppies. I saw rave review after rave review. So here we are 21 issues later and I still haven't read a single issue...

Until the other day I found a copy of the first trade for 5 Canadian dollars at my local comic book shop and said "Okay, let's do this". "DO THIS" I tried.... and failed. I didn't completely finish the first trade. I was so..... BORED! I WAS FUCKING BORED! I sat down looking for a time travelling, sex fueled heist and got a stereotypical take on a teenage girl discovering her body (in a bathtub) written by a dude and a lot of really boring exchange between two people talking about masturbating and sex. By boring I mean, there wasn't one line that made me laugh.

I heard the book was clever and funny. I am the type of person who laughs out loud while reading comedic stories. You can ask my fiance about that one because he makes fun of me on the regular about it. Not once, in fact while laying next to him in bed I slammed the book down and looked over at him and said, "this book is totally overrated". I immediately went on facebook and asked everybody about what they thought of the book and then I picked up volume 1 of Ranma 1/2 and began giggling. Mood improved 100%.

So after a day I got a shitload of replies about SEX CRIMINALS. I wasn't the only one who thought it was boring or mediocre. In fact, a bunch of other comic book Youtubers, reviewers and journalist replied with the same reaction. I had several comic book creators chime in with their two cents agreeing and comic shop owners also confused about how the book gained so much hype. So WHY did it get so popular? My immediate thought is that after the success of Matt Fraction's Hawkeye run  in 2012 (which I really did enjoy btw), apparently Fraction was the golden boy and everything that spun out from under him was a golden egg rather than a golden shit. I think they might have been wrong about this one... I'm really leaning toward a rather mediocre, plain egg. I can't really call the book shit, it's not. It is in my opinion, just so mediocre that if anyone else had conceived it, I believe it would be universally ignored.

But I'm not trying to make a big dig at the writing. I have opinions on the artwork as well. I would have been very happy if the entire book looked like that cover. See that cover I posted at the beginning of this article!? THAT ONE. That cover is brilliant. The inside of the comic, not so much.

I really didn't like the artwork. I tried to envision it without color and thought "Oh there it is. There is Chip doing that thing I've appreciated in him, in the past". But why does this particular book look so awful? I remember looking at the artwork when issue one dropped and my instinct said: NOT THIS BOOK. (I feel like I'm using a lot of capitals in this article which isn't terribly typical of me but lets just go with it shall we?)

So what is it that I don't like about the artwork in this book? The coloring. I am still NOT a huge fan of the way the book is drawn. I've seen Chips work other places and really enjoyed it but not here. I went to the inside cover of the book. I saw two credits, Becka Kinzie and Christopher Sebela (side note: Christopher being a writer I've enjoyed many books from in the past) are credited with Color Flatting. That doesn't really explain the issue here.

Flatting, if you're unfamiliar, is a job to speed up the coloring process by separating the elements on the pages into colors. The colorist can then select those colors with the Magic Wand Tool in Photoshop to quickly change and edit the colors. This suggests of course that Chip colored the book himself. So another strike against Chip I guess. Damn, I love supporting Canadian Comic Artists but damn. I've never had a fondness for the Photoshop look  anyway, which is screaming from the pages of this book. If only this book was colored in a moebie-esque pallet but not everything can look so lovely.

So I attempted to do a bit of research about this series and all I could really find was a lot of rave reviews from comic book media sites and a lot of mediocre reviews from actual readers on Amazon and some bizarrely 4 star rated reviews that were actually just full of criticism. 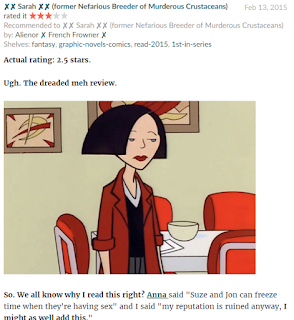 Yes I did find a couple pleased people and of course, people are more likely to write a review about a book if they had an extreme reaction to it one way or the other. I wouldn't normally post other peoples reviews in a way to back up my own but I really find this interesting. For an Image series, I normally don't see this sort of anomaly which leads me to wonder...why is Image backing this series so hard? Yes I realize that favoritism happens at the publishers house, but without an insider view I can't accuse them of blind favoritism. I don't see the sales stats so I can't see how well the book is selling. It could be selling very well and therefore Image sees fit to back the series harder.

At any rate the series continues to be published leaving many of us apparently, very confused. I dunno know about you but I'm going to go read some more comedic manga.