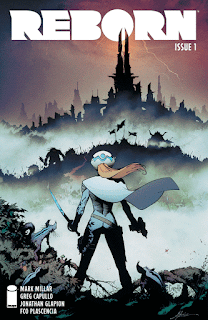 I almost feel like I have to start this review with a disclaimer. I'm a big Mark Millar fan. I really loved so many of his mini series like Starlight & MPH, I loved Jupiter's Legacy, Kick Ass and of course a bunch of his even older stuff. So when I saw the press release for Reborn, I got really excited because the main character/hero is female. The artwork of course interests me as well. At this point, Mark can pretty much work with any artist he chooses. Greg Capullo has been illustrating Batman for the last 5 years and although I don't give two shits about the New 52's iterations of Batman (besides maybe Batman '66), there's no denying that Capullo isn't ridiculously a ridiculous talented artist.  This can be particularly noted in the scenes where our heroine dies and is "reborn" in this mysterious fantastical new universe.

And here we go now all my criticisms, so the story starts out with a few LARPER looking snipers taking out some mundane looking people who are minding their own business and it's pretty clear from the scenery that the LARPING snipers and their targets don't actually share the same space. Before we know it their target practice ends and we're listening to an elderly lady reminisce about her life. She's living out her last days for a couple panels and then... she's gone. This is where the book gains it title. Our heroine dies only to awaken in the field of battle as a bodacious babe with a sword and a legion of bowing minions. Like seriously, I think these are minions (not those minions from Despicable Me). They're monstrous but apparently looking at her as their leader/savior.

So not only do I honestly feel this is a pretty bland storyline so far, I'm kinda angry that the story jumps around so much and leaves the only real interesting part at the beginning as if had no significance. I mean, don't get me wrong, I know first issues are intended to get you hooked and leave you hanging but I'm not really feeling invested enough in any of these characters to give a rats ass what happens to them.  The reason is that this first issue jumps around too much between characters AND it's too short. I know what you're thinking, "AMY it's longer than any Marvel & DC single issue!". Well, a good first issue is more about introducing characters, it's about getting you to care about them. This was too short to be able to do that and it tried too introduce us to too many people. This is why sometimes, I think that many stories need to be released as complete graphic novels instead of constantly trying to cash in on these monthly subs. Brian K Vaughan gets it. He still releases complete graphic novels fairly regularly. I assume that he knows that some things are better binge read and therefore provide a better experience to the reader, left intact.

On top of that, this story really feels like nothing new to me. This is perhaps due to the ridiculous amount of manga I've consumed over the years. Normal people being transported to a magical, fantasy land, swords and battles... well lets just say I was a HUGE Escalfowne fan (I guess I should say that I still am). There are loads of stories like this that have come out of Japan. Not to mention that this particular story has started reminding me of that Canadian series The Odyssey which aired when I was a kid. It's about a boy transported to a strange world while he's in a coma. For instance, we're made to think that the main character has died but has she? It doesn't feel fresh to me and honestly, the freshness of the story wouldn't so much be an issue if I felt more invested in the characters.

I was really hoping that this would be a new fantastical series for me, yet I'm afraid, Reborn is a miss.
Posted by The Frog Queen at 4:14 AM