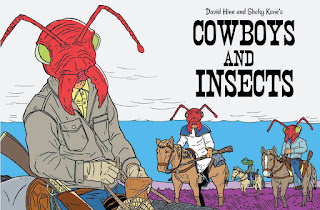 This one-shot comes from one of my favorite comic book artists Shaky Kane (also the awesome artist who created my Frog Queen Logo!). Shaky is collaborating again with David Hine. You'll likely remember them together on titles like The Bulletproof Coffin but Hine has been all over the place in comics. He's written Spider Man, The Darkness, Batman, Crossed, X-men... the titles just go on. He even had a hand in Spawn for a while.

I really wish these two could just continuously release shorts like this together. I'd be thrilled. Shaky's work is reminiscent of a better time in comics, when people used their hands and not copious amount of computer programs. Don't get me wrong, I totally appreciate TONS of digitally created comics but there's something to be said about Shaky's process which you can actually watch online!

One of my favorite parts about this one-off is the format. The cover has been printed on this oddly shaped card stock and it really stands out on the shelf. I know what you're thinking however, "if I bag it, it's going to float around messing up my comic box and creating creases". Well do like I do and have boxes specifically for non-modern aged comics. Simply due to the fact that I support a lot of indie creators and self published comics, I have a great number of uniquely shaped comics.

So the story itself of course is awesome. Everyone knows by now that I'm vegan, and this story is oh so vegan. The story centers around the retold events of a man's childhood crush. It also happens to center in a world which harvests giant insects for food and other commodities. The man explains that his family were ranches. Giant ant ranchers to be certain and his first crush, first kiss was a gothy looking young vegetarian. The boy takes direction from his family who explain that being a vegetarian goes against nature. It's corrupt thinking... and well... apparently violence towards those who think differently than you is actually NOT corrupt thinking.

So you know it has a really happy ending...actually the ending is really the best part. The cover is immensely misleading as you think that the cowboys themselves are ants but this isn't so. However, in a very fascist clan type way, the cowboys band together wearing the heads of their slain livestock to round up and deliver retribution to these veggie loving family. Remind you of anything?

The thing is, a lot of people really DO think that eating other sentient beings IS normal. Violence is violence however and that's something that our world hasn't quite grasped. This is where terms like speciesism comes from. It's the belief that your own species, humanity is superior and this thought process leads to the exploitation of animals.  But this short story really imparts the message that violence towards people and violence towards other sentient beings, come from the same place of ignorance and so, I love it.
Posted by The Frog Queen at 4:06 AM