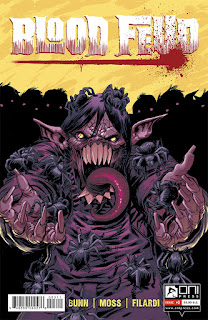 We've only got two issues left and I can't say what exactly is going to go down now that the vampires clan is uncovered and been made extremely upset...guess you'll just have to check it out. Get your copy  of issues #3 this Wednesday!
Posted by The Frog Queen at 3:53 AM