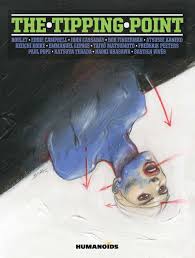 I'm so grateful for being able to read this pre-release. Tipping Point is being released by Humanoids in January of the new year! What an amazing way to start the year. I love anthologies and I adore short comics.

This anthology includes 15 of some of the worlds most celebrated sequential artists. They have each contributed stories where a tipping point forms mentally, emotionally, physically and rides the line between reality and perception.

Obviously, there are some big names in that list. A couple of my favorites which got me excited for this release are of course, Paul Pope, Bastien Vivès (who you will remember me raving about after reading Last Man this year which just made it to North American readers in English!) and Naoki Urasawa (of Monster, Pluto, 20th Century Boys). Some of the stories take place on Earth as a sort of "Slice of Life" type story while others are pure science fiction and some mythological.

I have to say that my favorite contribution comes from Naoki Urasawa which emotionally lingers long after you've moved onto the next story. It's impossible not to adore his artwork and I really enjoyed the more minimalistic approach he took for this short. Although all shorts are equally through provoking, this is my favorite from the collection.

Please check out the awesome video trailer for the book on the Humanoids Website. I'm only sad this didn't make it out for Christmas as it really would make an amazing gift for that comic lover on your list. I would suggest making a pre-order on Amazon as it will be pleasant belated gift when it ships to their door in January.
Posted by The Frog Queen at 4:54 AM