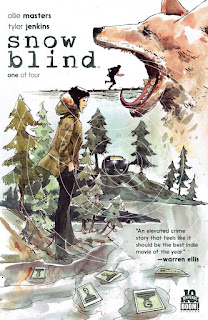 Here's a book I could not miss and you shouldn't either. Tyler Jenkins (Neverboy) and Ollie Masters (The Kitchen) have teamed up to bring us a four part mini series debuting this Wednesday, December 9th. Just before Christmas!

The story begins with an introverted teenager who breaks into libraries to sit and read books after hours. It becomes apparently quickly that the secrets his family has been keeping from him are about to unravel.  As always I won't spoil the plot.

Of course you might remember me praising the work of Tyler Jenkins previously. His work can be mistaken for no one else and his character design is distinctive and pronounced. What I enjoy most about Tyler's characters is his ability to accurately illustrate the state of mind of his character. This book accurate echoes the loneliness, complacency and even frustration which is felt by the characters instead of relying of script to do so which is ALL too common in comics right now.

Equally, Masters has weaved an inner monologue to take you into the deep recesses of Teddy's mind. I screamed about The Kitchen more times than I care to admit and I must have got half the people I know to grab the trade. Master's is a master of the inner monologue. It's something I personally admire.

So I know I haven't been writing many reviews lately! I shall apologize now! I'm still reading lots and I think you should check out this gem from Boom Studios. I've been really happy with all the series coming from Boom this year. It's nearing the end of their 10th Anniversary year and I think it's been an excellent year of solid releases from a fantastic label I hope to see them around for another ten years of great content.
Posted by The Frog Queen at 4:58 AM