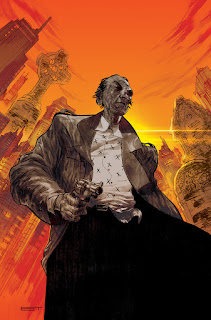 It is my pleasure to bring you this exclusive interview with Ed Brisson (CLUSTER, 24:UNDERGROUND) and Argentina based designer Lisandro Estherren on their upcoming collaboration THE LAST CONTACT available Jan 13th! Today is the final day for pre-ordering the first issues of this highly anticipated crime series from Boom Studios!

TFQ: Where did the inspiration for this story come from? How did you begin to develop The Last Contract?

ED BRISSON: THE LAST CONTRACT was a weird one for me. Normally, I'll carry story ideas around for months, maybe years, let them gestate and develop. However, THE LAST CONTRACT wasn't like that at all. I was pitching a bunch of ideas to [BOOM! editor] Eric [Harburn] for a follow-up series to CLUSTER and nothing was really sticking. I think we'd burned through about 10 or 15 ideas that I had and none of them was really right—regardless of how long I'd been sitting on them.

Eric asked if I had anything else, and I didn't, but said that I'd always wanted to do a hitman story and Eric asked for more info—the thing was, I didn't have a idea. I just knew that I wanted to do a hitman story. So, I did was anyone else in my position would do: Fake it til you make it.
I sat down and literally made up the story in my email response. I was completely flying by the seat of my pants, spinning out an idea of an 80-year-old retired hitman who finds himself in the crosshairs of someone who wants revenge for something that happened over 20 years earlier. I didn't want this to be like a Liam Neeson-style retired hitman; I wanted to do something where it's a clearly geriatric, forgot-where-he-put-his-glasses-even-though-they're-on-his-face style of older, retired man. Once I nailed that part of it, it's like the flood gates opened and I had what I felt was a real interesting story on my hands.


TFQ: What kind of action can we expect to see in this story? Will it be a fast paced adventure or more focused on interpersonal relationships and introspective character development?

BRISSON: There's going to be quite a lot of action and dark humour, but much of the story is going to focus on The Man coming face to face with the people who've been impacted by all the lives he snuffed out. Even 20-plus years after his retirement, the rippling effects of his actions are still prevalent, the wounds still raw.


TFQ: How did the two of you come together to collaborate on this book?

BRISSON: Eric and [assistant editor] Cameron [Chittock] had a bunch of artists that they've been wanting to work with and sent me their portfolios to look at. They probably wanted to strangle me during this process because I tend to be really picky about who I work with and kept passing on artists. I wanted to make sure that the art suited the story. So, while there were plenty of good artists presented, great artists even, none of them felt right.

Then they showed me Lisandro's portfolio.

I instantly knew that he was the right artist for the job. Thankfully, he was available and seemed really into the story.

Once the pages started coming in...man...there's NO ONE else who could have drawn this book. People are going to be blown away by his work. Every time new pages come into my inbox, my jaw hits the ground. Just amazing.

TFQ: Lisandro, could you tell me a little bit about your artistic process? How did you develop the atmosphere for this series? Are there any references you used to develop the settings and character appearances?

LISANDRO ESTHERREN: Yes, there is a primary mood that we set from the start. We are making a gritty crime story, so we needed a strong, heavy, black-and-white look, but also trying to add the subtleness of the greytones that helps to modulate the light values.

About references, part of my job is to follow close to the script, to study some realistic settings, and dig out its nature to make the storytelling more interesting. The character development follows a similar process: close study of the references, sketch a lot, and push the features beyond to find the proper look. I think the readers will enjoy this creative run.