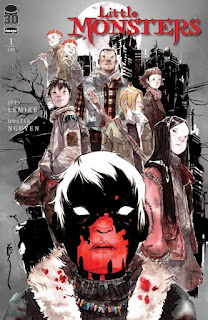 The team that brought us DESCENDER and the spin-off story ASCENDER, is at it again. This time they brought us a horror inspired story about the last children on planet Earth who also happen to be starving vampires. LITTLE MONSTERS. Oh if you're around my age, you're probably reminded of the Fred Savage movie from '89 staring Howie Mandel. Ya I barely remember the plot of this movie. It was not one of my favorites as a child (is there any wonder?). No, this title doesn't seem to have anything to do with that one. Thankfully.

What we have here is an introductory issue that quietly presents each of the last living children to the reader. Lemire and Nguyen have perfected the atmosphere of this post-apocalyptic world with these near expressionless characters. You feel every bit of their ruined environment through the black and white panels. I should say, nearly completely black and white. Like so many great books before (some Frank Miller comes to mind), Nguyen uses reds as an impact effect to draw the readers eye to important parts of a panel. Blood never looks so impactful in black and white of course but he also uses the red to underline the names of the children as we meet them, among other things.

Through this debut issue, we get to see a little about of the humanity as well as the brutality that has been left behind in these eternal children. There's a beautiful moment revealed between 2 of the older children, Yui and Lucas. In this moment is revealed the nature of their day to day like as well as how they had to adjust to their new environment. Their eternal life in a dead world, it is obvious from this conversation that time is meaningless. It got me thinking what most people would do if time was meaningless to how our lives eb and flow. The day to day life of the monsters is completely unencumbered by responsibility or purpose. They don't even seem too hard-up on the survival front as they are depicted eating rats later in the book. I guess those are in no short supply. But the rest of humanity? They have not seen hide nor hair in what must be decades. The exact time frame since the death of the last human at this point is unknown. Yet if I know Lemire, he's likely got some amazing lore to share about this world. That is to say, if past stories like Descender can be any indicator.

I am very excited to see where this story was headed. I was reminded of The Wrenchies by Farrel Dalrymple while I read this issue. Simply due to that quiet atmosphere created by the illustration and narration. Or perhaps its the fact that its a story centered on odd children. Hard to say! I tried to keep all spoilers out of this article and will endeavor to do so in the future. More reviews to come. I wish I could assign a numbered rating to comics but that just isn't me. I think if I had to, I would give this issue 3 out of 3 crowns for leaving me enough curiosity to read the next issue. A thoroughly enjoyable introduction to the series.