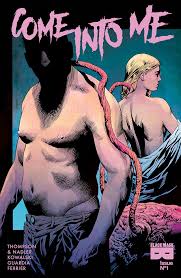 My first thought was eXistenZ, that great Cronenburg movie (who am I kidding, they're all great) from 1999. The umbilical-like chord is of course what did it. But COME INTO ME isn't anything like eXistenZ except for the fact that we're dealing with crazy cranial technology that affects people's perception. In this case we have INBEING, a new technology that allows two people to share the same body. But what was originally developed to help patients with various challenges, is now being considered as a new form of entertainment... A new kind of escapism. You can see a few similarities here.

COME INTO ME is written by Lonnie Nadler & Zac Thompson of Marvel Comics CABLE, and Black Mask THE DREGGS. Illustrated by Piotr Kowalski who’s work I know best from Clive Barkers NIGHTBREED released in 2015. I'm extremely pleased with the artwork here and totally in love with the color job done by Niko Guardia. The vibrant pinks and purples are giving my Moebius flashbacks. That's fairly normal for me though, I mean I'm always having flashbacks about comics and Moebius is often on the brain. Regardless, I do get a very retro feel from this artwork. I was a huge fan of Kowalski's work on NIGHTBREED. His panels feel very uncluttered and straight to the point while also always imparting the appropriate mood to help me grasp the emotions of the moment. A lot of the story focus is on alienation and loneliness. The panels capture this distance between characters I would say, even with their inability to make eye contact.

The opening scene for one is simply amazing. What a wicked start to a comic. It's more of an introduction than an annoying ploy to thrust us into the action of a story like so many books these days. I really appreciated that we get a little glimpse into what INBEING can do and just how dangerous it can be. I'm sure you can imagine how awful things could get should the device failed to work properly during the transferring consciousness or if something else were to happen...

Of course things go horribly wrong for our main character but in the most interesting way. I can't spoil it. The story progresses with an even flow and allows you to actually get to know your main characters. I feel like this rarely happens anymore in serialized comics. Bad pacing, pointless cliff hangers, too many characters so that we don't get enough info about one or it's a superficial overview. I should just write a list of problems with modern serialized comics. Another major problem with modern comics is that some of them just should not be serialized. They would make amazing graphic novels but cutting them up in little pieces loses the reader and the story suffers as a result. COME INTO ME doesn't have the problem. It's a serialized comic which has logical conclusions to each issue (so far) that also manage to keep you interested and craving another issue. It's so refreshing to see someone actually get it right for a change and I can't wait for more.