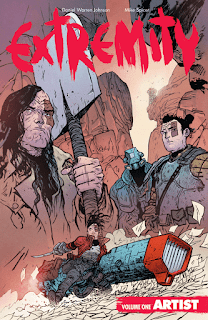 Although I have long appreciated Johnson's artwork online, this is the first book I've read which he has written. I have to tell you that I'm hooked. I didn't think I would be. I initially thought "Oh here's a book I'm going to love looking at but will likely be really bored story-wise". I'm delighted to say that my initial concerns were not confirmed. I found the story engaging and extremely well paced. Although this isn't the type of book I'd let children read, it's reasonable that a teen over 15 could read this graphic novel without parental worry (unless you like your kids 100% free of any type of fictional violence in which case, good luck with that). I do plan to create a video review of the most recent issues but hey, that's for a day when I have my voice back!  Extremity issue number 10 is currently available so get reading!  Don't make the mistake I did and wait for the trades because this is a series you're going to need to read monthly! I learned that the hard way!
Posted by The Frog Queen at 12:30 PM