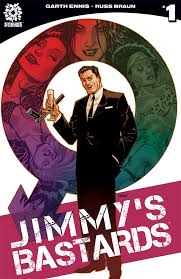 
Aftershock Comics is getting all the good writers!  Damn here we have a new Garth Ennis story!  A whole new character creation. I guess I have to say I fell in love with Ennis during Hellblazer. So I make a point of reading his stories when I can.

This story centers around a un-likeable character named Jimmy Regent. He caught me off guard from page one. I didn't quite understand what I was getting into. My initial thought was that this was an Archer rip off sort of character but that's not quite it. Although there's glaring similarities, Jimmy himself isn't really anything like Archer except for the stereotypical Bond qualities (dashing super agent, playboy, alcoholic).  He's a lucky 007 in a ridiculous world. Things just happen to work out for this Jimmy Regent and he's 100% confident that they will. At least, in the beginning.

My favorite part of this book was the gadgets area where we get to see a tiny little roving unit known as the Micro Aggressor that is remotely driven around and shouts "THESE PEOPLE!" repeatedly. It's meant to incite groups of people. Hysterical.

There's a point later in the issue that kinda gets to me. Regent gets a new partner. She's a tough, yet beautiful lady of color and Regent points this out by asking if she has had any "token work". It's not this as the joke carries out appropriately and isn't actually offensive but funny social commentary. What gets me is his partners attitude to other women. I see this so often in books, movies, comics and while I will agree that there are women who exist to look down on other women for being pretty, and wrongly judging them to be stupid because of it, I TRULY am so tired of this character consistently making its way into stories. It's tired and played out. I think it actually reinforces the idea that people should continue to judge women on their appearance: Pretty and flashy clothes? DUMBASS FLAKE. Business suit & modest wear? STUCKUP PRUDE. It's just exhausting, what year is this?

Yet in the end of the issue we're rewarded by all this show of masculine prowess with a hysterical look at Regent's greatest foe of all time!!  OH I WANT TO SPOIL IT... okay I won't.. I won't...

GET ISSUE ONE NOW AT A COMIC SHOP NEAR YOU!