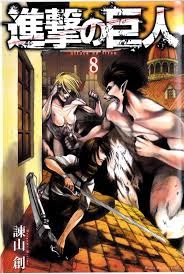 I dunno how I feel about the whole female titan plot development; let alone the fact that volume eight reveals the female titans identity as Anna! I know that part of writing a review is being able to accurately describe a subject and your feelings/thoughts/opinions surrounding but I don't know that I have one in this case. I suppose you may ask why bother writing anything but I feel like I might as well carry on with the blurbs. I will say this, I was intrigued by the idea pushed at the end, that the wall was full of titans. It's an interesting concept. The humans are defending themselves from titans WITH titans. But I suppose that does tie in nicely with Eren's whole ability to turn into a titan himself and perhaps affect humanities struggle positively.

I was quite shocked at the end. The wall development was the only aspect that made me dive into the next volume. God knows it wasn't the characters. I'm not sure what it is about the series but I still haven't found a character I like. Anna was perhaps the one I was beginning to like but know she's a moot point. Captured and unconscious, encased in some translucent and impenetrable crystal. Yea... there's something else I'm not quite getting. I don't totally enjoy the fact that foreign and explainable materials just kinda well.... materialize (snicker) when the humans turn into titans. I also dislike the human hiding unconsciously in the back of the neck of their titan form. It makes me think of the mechas in evangelion and not magic-super-soldier-colossus-thing that I want the titans to actually be. I don't want them to be a mobile suit, I feel like they need to be magic or higher beings or something. Oh, who am I kidding, their probably just aliens. Or worse! Humans in mobile suits! Damn it, I want them to be magic. I'll just keep reading now.