Interview with Jason Copland on KILL ALL MONSTERS OMNIBUS 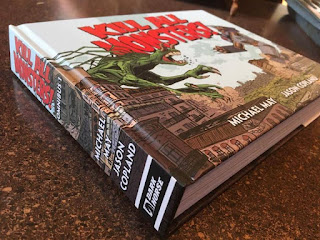 Welcome back Comic Book Junkies! Once again I've taken to the word processing app to bring you a fantastic interview with one of my favorite comic book artists. Today I bring you and interview with Jason Copland who is going to tell us all about the new KILL ALL MONSTERS OMNIBUS available at comic book store near you on July 19th, published by the prolific Dark Horse Comics.

KILL ALL MONSTERS has been a long running labor of love, an action packed clash or monsters, robots and humanities fight for survival! Here's my interview with Jason Copland.

TFQ: My number one question is when is the omnibus coming out and what stories /vol does it compile. I know that this story had been going on a very long time. Since 2013? Does it include all stories, even ones previously published by labels other than dark horse? Also, what age group is this story aimed at? I only remember reading it a really long time ago and I thought it was all ages but can't remember.

Jason: I know, right? It feels like forever for the book to finally hit the shelves. But the Kill All Monsters Omnibus is indeed hitting comic retailer shelves on July 19th and larger bookstore retailers on August 1st!

Dark Horse Comics has done an amazing job putting this 368 page hard covered tome together! The book will include everything we have done concerning the main story plus the Dark Horse Presents story from last year and a never seen 40 page one shot that introduces an new robot. The book is aimed at an all ages group.


TFQ: What can fans expect to find in this omnibus? Have you and Michael included any creator or process material?

Jason: The book doesn’t contain any process material, unfortunately. We do have pinups, though! Johnnie Christmas, Otis Frampton, Brian Level, Jeff McComsey and Frankie B. Washington have flexed their creative muscles and supplied us with absolutely amazing images. It’s always a thrill to see how other artists interpret your creations and these guys blew us away with what they came up with.

TFQ: Can you tell me a bit about how this story was initially conceived? How did you get involved with Michael May for this project and how did you begin to collaborate on this project?

Jason: I met Michael online via a now defunct comics message board. We had similar interests in comics and movies and I mentioned I was looking to drawing something cool that featured robots and monsters. A mutual friend had come up with a basic concept of a world overrun with monsters and a group of people determined to fight back but he wasn’t interested in writing the actual story. Michael and I dug the premise and we used it as a springboard to help get us moving.

The actual collaboration process between Michael and myself is fairly dull to describe. We tend to work quite independently. Michael goes off and writes the script. Once I get the script, I design characters/monsters/setting/etc and start drawing the pages. We trust each other fully, so we tend to just stay out of each others’ way.

That said, I do suggest pacing options if I feel like the page needs to breathe differently than the script is describing. But we talk those ideas over and come to an agreement.

TFQ: What is your favorite part of Kill All Monsters? What part was the most fun to illustrate? 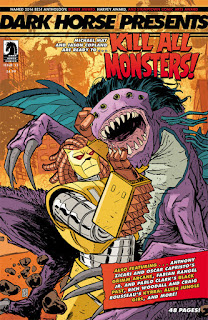 Jason: The fight scenes are my favorite parts of the book. Those are so much fun to draw! I even make sound effect noises as I draw those panels. Hahaha!


TFQ: Do you expect to create more stories in this series in the future? Do you feel this omnibus marks a closure or a new beginning?

Jason: We will definitely be making more Kill All Monsters stories. The ending of the 40 page one-shot in the book hints at the continuation of KAM beyond the omnibus. Plus, this is a book that has everything I’ve ever wanted to draw: robots and monsters. How could we not make more?


TFQ: Can fans purchase any of the original art from the series?

Jason: I’m very open to selling the original Kill All Monsters art. People interested just need to drop me a line on Twitter at @jasoncopland and we can work out the details.
Posted by The Frog Queen at 4:59 AM