HEROES INTERNATIONAL! “A comic book featuring a superhero team just like any other popular superhero team from Marvel or DC with one exception...They Suck!” 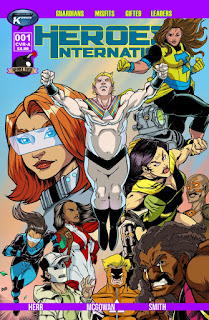 HEROES INTERNATIONAL is an ongoing comic book series about an unconventional band of superheroes! Short Fuse Media launched a new Kickstarter and have gained a staggering $4100 CAD already! With flexible reward tiers, the team has made it possible for anyone to get in on the action! Their rewards range from digital to printed media, t-shirts, posters, action figures and more! With only nine days left to be apart of this campaign, you don't want to wait! PLEDGE TODAY!

Here's the skinny:
Years after a tragic event that the media dubbed “The Zero Event” where all of the superhero population disappeared, new powered superheroes begin to emerge around the world to fill the void left by the missing heroes. Even though most of these heroes lack training and experience, a division of the government called the Extra Human Division (EHD) begins to ban a few of these heroes together as the new generation of the super team called Heroes International. Can this diverse cast of characters find a way to work together and save the world…or will they die trying?!