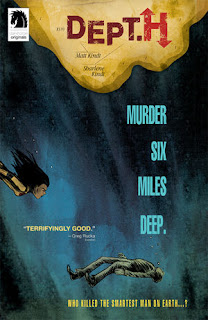 The title of the comic looks like DEPTH but it's actually Dept H which means Department H. New York Times best selling creator Matt Kindt (Mind MGMT) teams up for this one with his wife Sharlene Kindt to bring this story of sabotage, murder and of course mystery.  Issue #1 hits the shelves April 20th. I read this last week and of course, I'm a little behind getting this article up.

You know I read this issue last week and I thought to myself, what lovely art. It's not particularly unique. It's not detailed and it doesn't look like it took years to put together but it has this charm. It's right up my alley really. It's soft and very indie in appearance. This is always charming to me. Anyway, the story itself as mentioned above is a murder mystery which is rooted in a traditional science fiction, under the sea adventure. Main character Mia must descend into Deptartment H to find out who murdered her father. She's surrounded by familiar faces and one of them is a murderer.

This really isn't a really riveting plot. It's a little mundane in my opinion. Maybe I'm just getting to the point where I find everything a little mundane in comics. Don't get me wrong, there are lots of amazing comics but they are hiding amidst all these sort of average type stories. However, just because the set up and initial plot line seems mundane, we don't know where it will go or what the actual story will end up being about. So I don't want to say this is guaranteed to be a mundane story. That would be misleading. I don't actually think that at all.

At any rate, I didn't find this first issue "terrifyingly good" as Greg Rucha is quoted on the cover but maybe it's going to get there? Let's hope. I like Greg. I believe him.
Posted by The Frog Queen at 5:56 AM