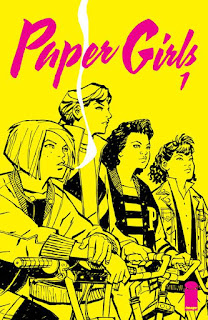 I feel like people are going to love anything Brian K Vaughan touches at this point. I mean Saga has taken storm over the comic book world and even managed to grab the attention of non comic readers and suck them into this whole world. This whole world of comics comes with a lot of bias like any other world. People are fiercely dedicated to their favorite writers and artists, so much so that they may be blinded to their downfalls. I believe Paper Girls is going to get glowing reviews and don't get me wrong, it's not a terrible book. It's just a so-so book judging from the first issue.

Let me explain why I think it'll get glowing reviews: because it's main characters are female and people want so badly to proclaim how powerful female characters are... when they are written by powerful men. Now Brian K Vaughan might not be powerful in the traditional sense, but lets just zoom into the world of comics and out of the rest of the world. He's a huge name, responsible for over a decade of amazing comics. I can't stress how big a fan I was of Y The Last Man, Pride of Bagdad and Ex Machina (just to name a few). Now with Saga, he's the elite of the comic book industry.

That however doesn't mean that everything he does is golden. I was passingly bored with the first issue of Paper Girls.  I think that some other young person stories that have just begun are better. For instance, I'm really liking Plutona. It felt far more entertaining and hinged on the same discord, bullying and harassment young girls face, not only by boys but their female peers. With Paper Girls, the bullies are just bullies without dimension, almost faceless and "evil". The bully's in Plutona feel real. They aren't "evil", they're just going through some evil stuff and not handling it well... you know.. like children do.

Why am I writing about this? Well, I'm a little tired of men writing about women and it being proclaimed the most awesomest feminist thing ever. I mean, don't get me wrong, I know male feminists and I love them. Do you know what feminists the public loves? Male feminists. So when a man talks about feminist issues in a book, they get considered (almost as if they are new concepts). When a woman talks about feminist issues in a book, exploring the reality through fictional characters... she's just a fem nazi, a complainer, and she should just stop fucking bitching. That's what the LARGER public believes.

So really, this article isn't really about Paper Girls, but the attention it will ultimately receive due to the above. That gets to me you know? It grinds my gears because it's not a great first issue. I don't think it deserves to be gushed over but I know that it's going to be gushed over and it's just mediocre. Now Plutona.....
Posted by The Frog Queen at 4:10 AM