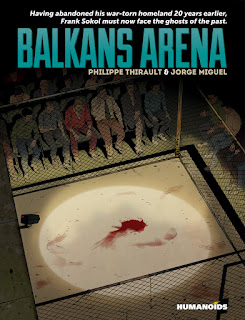 This is a story I never thought I would read in the form of a graphic novel. It acts like a true crime drama but the story is all too real. Just released on October 14th, Balkans Arena has already received a lot of attention. The story is based on real events however is a work of fiction and so are all the characters. Even still, an eerie chill crept into me as I read on. The thought that some one somewhere was subjected to such a horrific life...I can't even imagine.

The story is based on a Croatian family living in Ontario, Canada. As officer Frank Skol receives word that his mother has passed, he makes the fateful decision to travel to his homeland with his son Ben who has never met his father's family. The story descends into a horrific tale of kidnapping and child trafficking for the purpose of underground fighting. Children are trained and forced to beat each other while Croatian mob look on and bet for the winner.

Written with Philippe Thirault, Darko Macan and illustrated by Jorge Miguel who is also responsible for the very humorous zombie book The Z Word and The Zombies Who Ate The World. This is quite a change of pace for Miguel but his style blends with the story to create the dramatic feeling of loneliness and helplessness the young children must have felt within the arena.

I recommend this book to everyone. Not only are the events compelling and thought provoking but the authors have put a tremendous effort into making the characters real, believable and endearing.
Posted by The Frog Queen at 4:23 AM