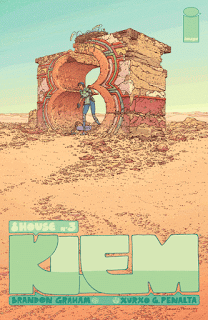 I feel as though the world requires a lot more buzz around 8House. The first installment of this unusual series entitled Arclight seemed to have appear without warning. Of course I had seen the odd sneak preview of artwork whispered through facebook and knew that I had to of course read this book. The concept that drives the series begins with eight separate houses and therefore separate stories. The first story Arclight had an extremely medieval feel driving the artwork and inspiration. Arclight was shrouded in magic and mysticism. The next installment Kiem debuts tomorrow and tells a very different story of an astra projection soldier who is about to embark on a secret mission. This story is illustrated by Xurxo Penalta who's work I became enamored with after following his posts on facebook. The incredible detail in his ink work and use of colors pulled me in. I started having Moebius flashbacks and that was about it, I knew I had to read Kiem.

If you haven't read the first two issues of 8House don't worry because Kiem is a completely separate story and you can certainly jump right into the series with issue #3 with no worry. Today with the easy access to the world of digital copies however, missing issues is of no real concern. You can most certainly get up to date with Cosmixology.  (Finally something good about digital comics lol I mean...)

I was very lucky to have the opportunity to ask Xurxo a few questions about Kiem. I am of course most interested in the amazing architecture he constructed. The dessert city is particularly impressive and that picture alone is worth reading the issue. Luckily the entire issue is also fantastic and every panel an involved masterpiece to behold. No one could possibly be disappointed with this stunning issue. So without me prattling on further, here's our Q&A:


TFQ: How did you get involved in 8house?
Xurxo: Through Brandon. He invited me to do a backup for Prophet, came out on #44, and from that point on there was talk about 8House coming together.


TFQ: How many issues are you illustrating for this unique series?
Xurxo: Initially Kiem is going to be 4 issues but, I hope we get to do more stories within the 8House universe right after that.


TFQ: 8House has a completely unique universe. Can you explain to me where the story you illustrated takes place in correlation with Arclight?
Xurxo: All books take off from different points but it all occurs within the 8House universe. Some familiarity with terms and concepts will build up as the issues of each series come out.

So far, only 3 in, you can start to see some patterns with the different uses of similar technologies, a common place culture of a ritualistic nature and a firmly hierarchical cast system, the 8 Houses.

TFQ: How did you begin constructing the architecture for Kiem? What did you use for reference or inspiration? 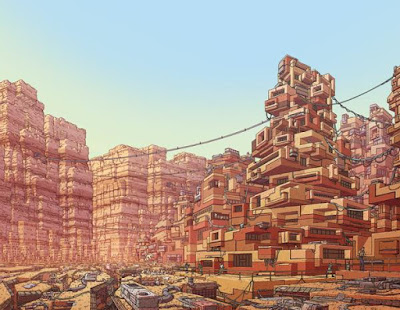 Xurxo: Brandon had a couple of references for the city sunk in the desert, like the rock carved buildings from Cappadocia, but they turned out more like the city of Shibam -name which I did not know until someone saw the pages and told me about it- then for the central constructivist complex of block-like buildings Brandon had a tiny picture of Habitat 67 by Moshe Safdie -which I also didn't know at the time- but in general, and other than on that page, nothing is substantially referenced.


TFQ: When working with Brandon Graham, how much direction does he give you on about the appearance of the world and characters?
Xurxo: We chat a lot about random things and from that we get a pretty good idea of what we're into.

There's some feedback and some selection when I send sketches, but it's all pretty logical -"this is way better than that" type of thing- I really admire his visual style, design and enjoy his sense of humor a lot, so I also try to have that surface when I doodle something new.