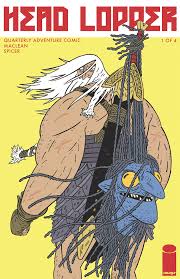 Tomorrow is new comic book day and you know what that means? Time for an interview! This week I bring you an awesome interview with writer and illustrator Andrew MacLean. Earlier this year, Andrew released the book ApocalytiGirl: An Aria for the End of Times which you heard me raving about. I interviewed Andrew on the book back in the spring.

Andrew's latest release Head Lopper hits stands tomorrow. I'm over the moon about Andrew's work and this fantasy based adventure is exactly what we need to end a great year of comics. After all we've got four months of releases left? Can you believe it?

Head Lopper comes to us in extra big issues from Image Comics.

TFQ: How did you develop the world surrounding the Head Lopper? Can you tell me where you came up with this character.

Andrew: It all started with a single drawing I did. I think I was drawing on a theme for a blog I was running at the time, and the theme was either "viking" or "metal." Regardless, I drew an early version of Norgal with an early version of Agatha hanging from his blade, with Norgal's foot up on another large severed head. And I just thought that this was something I could draw forever. 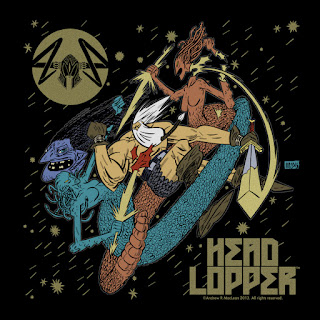 I thought the severed heads were really funny and could become a dark running joke. When It came to the actual world around the characters, I have been a fan of fantasy/adventure my whole life. As a kid I watched Arnold Schwarzenegger play Conan and Ray Harryhausen's monsters fights in Clash of the Titans every time they were on TV. Later, I fell in love with reading The Lord of The Rings, Song of Ice and Fire, Conan, Hellboy, etc., I'm a huge heavy metal fan (music), and a lot of metal lyrics talk about those fantasy books. My heritage is Scottish so naturally I have a bit of a fascination with Scotland, particularly the highlands. So the Head Lopper landscapes, rock formations, castles, much of that comes from spending a ton of time just marveling at photos of Scotland - of course I make no attempt at placing things in the right time or place because Head Lopper is complete fiction, but that's where it all comes from visually. 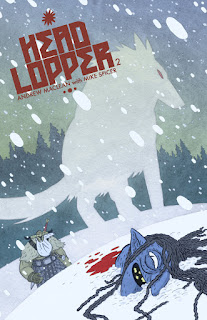 TFQ: How long has Head Lopper been in the making?

Andrew: I've worked on it off and on for more than two years now. It started as this thing I did kind of in response to having a ton of pitches turned down while drawing a bunch of stuff for other writers. Not that any of it was unenjoyable, but I longed to draw something like Head Lopper and stick it in people's hands and these books just weren't that. So a chunk of time presented itself and I used it to draw something that I would feel good about even if I never got to draw an "issue two" of the thing. That comic ended up being the first of three chapters in issue one of the Image release.

People ended up responding really well to that comic and asked for more. So about a year later, I did a Kickstarter for the 45 pages that ended up being the second of the three chapters in the first issue of the Image series. I drew that second story as I was working on the script for ApocalyptiGirl: An Aria for the End Times if I remember right.

TFQ: Leading up to the Image release, you've had loads of contributions from artists all over the globe posting their own portraits of the Head Lopper. Just how big is the gallery now and how do you feel about this tremendous support from the comic book community? 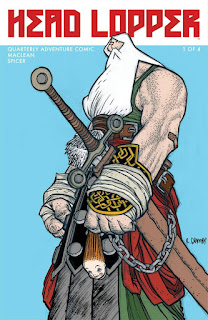 Andrew: Oh man, it's surreal really. I've had a pinup gallery in each of the releases so far but beyond that people just really like the look of Norgal and so there is a decent amount of fan art. Which seems crazy to me because until now (or September 9th really) its just been a self published comic. But yeah, I don't know, there are dozens of Norgal's and Agatha's floating around the internet, some by really incredible famous artists too which is just absurd. I don't even get it, but I feel fortunate.

TFQ: Will the Head Lopper continue past the original three volumes which you had previously released on your own?

Andrew: Head Lopper is set for four REALLY big issues at Image. Issue one is 96 pages (only 2/3 of which were previously self published) and the other issues going forward will probably be 60 pages each (entirely new content) - coming out Quarterly. Each issue is what I call a chronological one-shot, meaning it leads into the next but you aren't stuck with an agonizing cliff hanger. Basically, I put some kind of beast in front of Norgal, he kills it, and in the mean time I move along some of the background pieces of the LARGER story. That larger story wraps up in the fourth issue. Actually, it's kind of like a series of short graphic novels

I'd like to do more after that. I have ideas, and the Head Lopper duo are kind of designed to be able to go on all sorts of adventures together, but at the moment Image has only agreed to do the four. We'll see, I guess it depends on the success of this initial series.

TFQ: The Grey Witch's head is probably my favorite character. Can you explain how you were inspired to write this character and how you developed her? (It's a her right? lol) 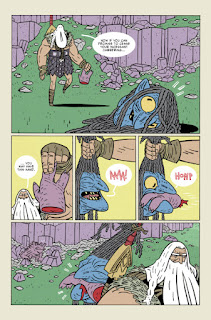 Andrew: Haha, yeah its a her. Agatha is rather deformed and a bit decayed and very old so its more than a reasonable question. She came about in part by the initial drawing, she just looked funny so I wanted her personality to be funny. I pictured the two doing a fair amount of traveling together, on foot, mile after mile just talking to each other. If they got along well those conversations just wouldn't be very enjoyable. So I decided they would hate each other. It wasn't until I really got into writing that I realized how much joy she would find in really disgusting things. She's really fun to write for.

At some point I thought it would be really funny if the comics were accompanied by a comic strip featuring just her, and so I came up with a bunch of jokes for her without any Norgal interaction. Then it occurred to me to just use those jokes in the main comic. So I've got a bunch of JUST Agatha scenes to slip in places when Norgal might be occupied.

Weird thing is, when I set out to do this comic originally, I wasn't trying to make it funny at all. I just kind of found the darkness of it naturally funny and people tell me how much it makes them laugh. I guess I just thought a dark sense of humor was uncommon. Now I can't help but laugh out loud when I come up with some new stupid disgusting thing for Agatha to do.