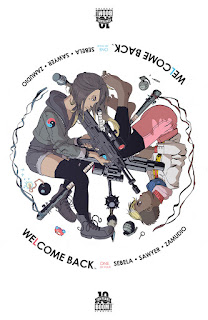 Here's something different! When you read as many comics as I do, it's really hard not to draw parallels across them. After reading Welcome Back #1, I didn't immediately think of any other comic. This four issue mini series has an epic concept, but can they make it work with just four meager issues? I'm always surprised at the amount of actually decent and concise stories people can make out of four issues these days. It seems a somewhat safe bet by the labels. They get to feel out the reader response and consider a sequel or on-going (if in fact that's what the creators were ultimately aiming for).  So many mini series don't ever materialize into anything else. So what's this story all about anyway?

If you had read my interview with creator Christopher Sebela the talented writer of Dead Letters, then you would know that Welcome Back follows the current lives of two reincarnated warriors destined to fight each other over and over, through life time after life time regardless of the fact they barely understand what they are fighting for any longer. Jonathan Brandon Sawyer (Black Masks' Critical Hit) is on board with all the illustrations. So how do I feel about it all?

I'm really liking lead character Mali. She's an interesting character full of all the snide comments and thoughts you'd expect from a young adult jaded by the publics reaction to her father being a serial murderer. Despite having a particularly cumbersome past, she adapts well to change and pushes forward without anyone to hold her back. Particularly her loser boyfriend that she barely even likes. She's tough but not without emotion and those are two things that have always endeared me to a character. Her inner monologue examines her feelings and thoughts on all situations and she feels real, she feels self aware.

Art-wise, I'm kinda digging it. I didn't have the pleasure of reading all of Critical Hit. It came out a few months back from Black Mask Comics and I only got to read some of the first issue. I can't recall getting into the story but I do remember having some affection for the artwork. The characters of Welcome Back have a sort of punk-tastic look to them. I really appreciate that kind of thing since I'm sort of a recovering punk...now just some alternative type with a job. You get the idea, I like the appearance of the characters.

I'm not crazy about the coloring because it lacks a clear pallet from panel to panel which is something I've always appreciated. Instead each panel feels as though it stands alone with its own coloring. A different plan of attack for each one. I've always been a bit sticky about pallets and as most people know, I'm dead in love with black and white comics. That being said, it's still a great comic and I'm very interested to see where this story goes. With a really excellent ending for a debut issue, I can't really figure out where our two warriors will end up.

In the end, I give it four out of five stars.