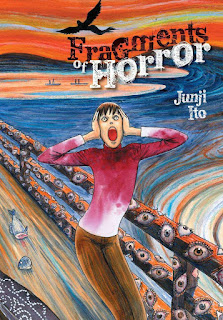 It's no secret that I'm a huge fan of horror and that Junji Ito has been the god of all that horror for me since the first story I ever read. A friend of mine introduced me to his work a few years ago. The first story I read was The Enigma of Amigara Fault. I was needless to say, SOLD after that.

Fragments of Horror is Junji's first horror collection in eight years. We've had nearly nothing in the English speaking world for longer. They keep re-releasing editions of Gyo and Uzamaki which is fantastic but so many fantastic stories haven't made it here and even when they are released, they're very difficult to come by (i.e. Hotel of Horror aka Tomie).  It's not that he wasn't doing things, he actually did a cat manga, a little pokemon thing and various other stories which didn't really have anything to do with horror. Yet part of me wondered if he lost something...

At the very end of the book is a page from Junji detailing his reasons for not releasing a horror book in such a long time. One reason listed among them was about the passing of his long time editor who apparently had thought that Junji may have lost his touch with horror. It's funny because as I was reading the story I started wondering the same thing.

It was the story Dissection Chan which first made me think that perhaps Junji was a little off. The story was there, it was bang on and very much Junji creepy. It was the ending. It wasn't the typical bodygore I was use to seeing from him. It didn't really make sense as an ending and that took the horror away. I felt the book redeemed itself somewhat after reading the next few stories. The Gentle Goodbye although not exactly horror in the traditional sense was very well written and eerie. I particularly enjoyed the story of the of the winged woman who saved a fallen man by feeding him pieces of chewed meat although there was a piece of the story that just didn't seem to fit quite right. 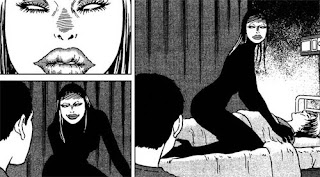 One of the key ingredients for any good Junji story is insanity. There is always one character with a firm grip on what it reality while reality changes and every other character in the story accepts the horror as perfectly normal. It was present in a few stories but its power wasn't utilized in the same way it had been in the past with Uzamaki or even some of the smaller stories like Grease.

In the end, these stories are still pretty great and I'm glad that they are part of my library. I do feel that Junji Ito is right when he says that he feels he's lost something. That being said, I do feel it may be coming back. Maybe he's just out of horror practice? That being said I really hope he starts pumping stuff out and I especially hope we start seeing more work printed in English. Particularly, I'd like to get my hands on a copy of The Black Paradox, but that's a whole other can of worms.