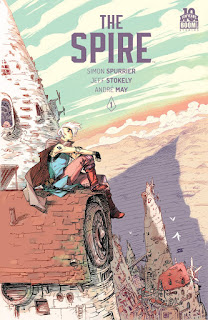 I've been anticipating this book for quite some time. Jeff Stokely does a great job of promoting his work and my twitter and facebook new feeds were constantly displaying beautiful images from the book. Gentle reminders to pre-order your copy. I can't stress how important it is that you support your favorite creators by pre-ordering their issues. I know sometimes I forget too but it shows demand, and drives sales. Often, it determines whether something goes to print a second time and it shows the label that an artist or writer are in demand. So, show your support!

I really didn't know much about the series until I read it. I knew it was a fantasy based story but I didn't realize that it's main character is a lesbian. I like this. Often in comics, female characters who are homosexual are generally drawn for a male audience. They are sexual objects to the men who read comics. Stokely's illustrations of Sha make her feel real. She's not objectified and has an actual partner. Even the most intimate scene is real and not gratuitously showing girl on girl action as if it's some porno. This I very much appreciate.

The story is easy to follow. A monarch dies and the thrown's successor is a woman who is very upset at the news of a recent murder within the lower rungs of the city. I wish I could tell you a little more about how the cities class system works. I'm sure there will be further explanation over time.

There's going to be eight issues in this series and I will definitely be grabbing all of them. Add it to your sub list now! Five stars for one of the most beautiful issues I've seen this year.