Exclusive Interview with Creators of Man vs Rock! 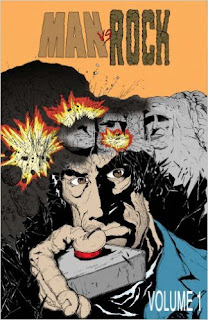 Hey all, something a bit different for a Friday. About a month ago I reviewed a crazy comedy called Man vs Rock. It was a really in-your-face- political comedy about man's struggles against their ultimate enemy... THE ROCK! (not the wrestler). Authors Victor DeTroy  and Kevin Bieber got together with talented illustrator Jared Lamp to bring the world this monster of a comic! I got to ask them some questions about the books. There are currently three volumes available! Check em out and check this out:

TFQ: This story is so unique, what inspired it?

Kevin Bieber: Because of Obamacare, we had to take a geology class in order to get our driver's licenses back from the government. While we were in that class they spewed all sorts of nonsense about how dangerous it is to use Tinder while driving. I would expect that sort of drivel from a bullshit Ayn Rand philosophy class, but not a geology class that helps All-American oil companies like British Petroleum get rich and become pillars in the community!

Anyways, I started listening to those foolish teachers and stopped Tindering while driving. Then one night, there I was: driving just as they told me to: completely Tinder-sober, not swerving one bit, both hands on the wheel ... when all of the sudden an old cougar jumped in front of my car while she was Tindering. Normally I would be completely hammered and I would naturally swerve out of the way. But not this time... I was as dry as a nun in the Sahara desert. I drove in a straight line and I murdered that poor innocent old cougar. I spent the next 50 years of my life in solitary confinement. Luckily, I was able to find a friend that could help me escape; he gave me a rock hammer. I would slowly chisel away at the wall behind my poster. Each day I would pour one pocket worth of rubble into the yard. Eventually I was able to escape to the distant paradise of Buxton, Maine. There I built a cabin in the woods and started to put all the pieces together. From the geology class to the rock hammer... something wasn't right...

Then it dawned on me... what if our greatest enemy was right under our nose the whole time? What if the enemy was just "playing dead" and doing a really great job of convincing others it was inanimate? That's when I realized that I must warn the world about the terrible, stiff villain known as ... January Jones!

TFQ: The story seems to hinge on the same kind of comedy that drives a lot of black comedy where everyone is really, really stupid and/or crazy? Is that the intention here? Are all the characters insane?

Kevin: Like a rock's genitals, it is intentionally ambiguous. And are you saying that we're just like every other black comedy out there? Because if you are then ... THANK YOU! You see, here at Man vs. Rock, we believe that individuality is a dangerous thing, like marijuana or a marketplace with more than two comic book publishers. Remember kids, Konformity is Kewl!

As to our intentions, our main intention for Man vs. Rock is to pay off all our gambling debts before the sharks find us and take Victor's other ear.

TFQ: I really like this art style, can you tell me what inspires your artwork?

Jared: In art school I did close studies on Peter Paul Rubens and Caravaggio, so I feel in love with anatomy, tissue, sinew, and this is an art form of extremes, so I can bend the characters into anything to match the comedy and derangement of the script.
TFQ: Are there any artists you look up to?

Jared: Bernie Wrightson, Frank Frazetta, Simon Bisley, pre-“Spawn”-era Todd McFarlane – anything from the 1970’s is cool. I’m just anti what’s "in" right now, the whole video game, Manga influence. I'm not knocking those artists, they do fantastic work, but I’m very pleased to be able to work with Victor and Kevin who are giving me creative carte blanche to do something different that goes against the grain of everything coming out in general. Viva Buck!

TFQ: How long has this story been in the making and what's next for Man vs Rock?

Kevin: Since the beginning of time, or at least since Donald Trump became a lock to be elected the next President of the United States. We wrote this book one day when we realized the quickest way to strike it rich was to write an independent comic book and, a dozen identity thefts later, we're still pinching ourselves.

We're really into small cons, so the next con Man vs. Rock will be at is something called San Diego Comic Con, at table H-10, where we'll be debuting Volume 4 (we also have all our merch online at manvsrock.ecrater.com ... we only accept payment in POGS though). If anyone even shows up at that con, we'll let you know.

After that, the next step for Man vs. Rock is to sell the rights to Michael Bay so that he can adapt it into a film that turns the rocks into giant robots and Man into a giant fleshlight. It has always been the glorious death we have envisioned for Man vs. Rock.