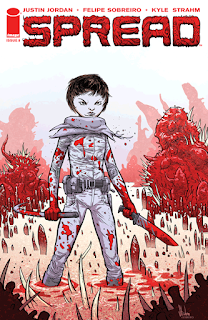 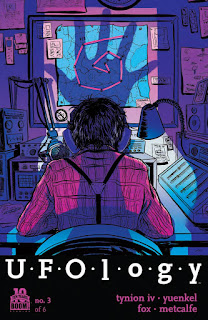 We finally get to read the end of Annihilator. It feels like it's been months since I read issue five. When I look back, it has been months! Whole shit Grant Morrison? What you're issue with this issue? Oh well... I guess you're kinda busy. All is forgiven but not forgotten and just like that, another mini series comes to an end. Yet, where one disappears from the comic book limelight and lives on mostly through the minds of people who actually read the singles as they were released, another series pops up...

This week's new recommended series is E for Extinction. You probably remember the original from 2001 (??is memory serves, I'm too lazy to google that). It featured Grant Morrison and the amazing Frank Quitely (I'm amazing we're not still waiting on the end of that feature). This rendition is told by Chris Burnham who has been quite busy recently with Grant Morrison on the Image title Nameless.

Ramon Villalobos' artwork is what made this climb into my pull list. This story promises to tell us what the X-Men have to face in a reality where being an a mutant is admired and not feared. In fact, it's something to aspire to. Sounds like my reality really. I could go for some muty powers. 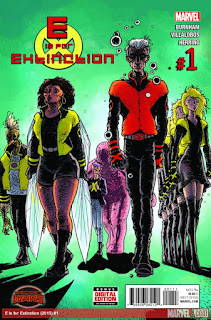 Riley Rossmo's beautiful Image series Rasputin returns. It's probably one of the most beautiful mythic-fictional stories out there. It took a brief hiatus when the Trade Paper came out last month and Riley has been super busy illustrating the new Hellblazer series but he's assured me that he has time for everything and no project will be back-burnered! I'm really happy Resputin is back so soon! That guy just won't die.

Speaking of awesome Image comics, Spread continues to tell the tale of soft spoken hero No as he attempts to flee the red alien threat known only as The Spread. Until recently the series was illustrated fully by Kyle Strahm but now Felipe Sobreiro has taken up the gig and I'm actually really happy about this despite how much I really liked Strahm's work. It's actually a pretty kickass change. The last issue was intense and I can't wait to see where this is going.

Let me not forget to announce the release of my favorite series FIRST TRADE! Volume 1 of Rumble is available today! GO GET IT!
Posted by The Frog Queen at 4:21 AM