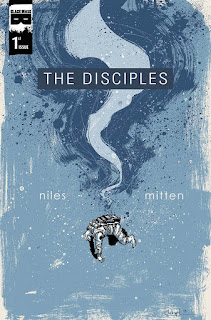 I'm a Steve Niles fan. Let's just get that out of the way. I've been accused in the past of being too loyal to creators (as if that was a bad thing). By being too loyal, I believe people are claiming that my eyes are bias to their work. I like to think that I'm able to calmly criticize creators I love when I see something that doesn't live up to what I've seen in the past, as their best work. Now, it ain't easy but I think I am honest.

So let's get down to it. I really liked this one from Steve Niles and let me explain why. Firstly, it's a science fiction story that brings it's characters near Europa. Europa is fucking cool. In case you weren't aware, its one of Jupiter's many moons and possesses on the higher possibilities in our solar system to being home to life. It's fucking cool. In this story, the crew of the ship Frankenstein (lol just joking, the ship isn't called Frankenstein), are traveling to this part of our solar system to find a chick who's been taken in by some cultist. 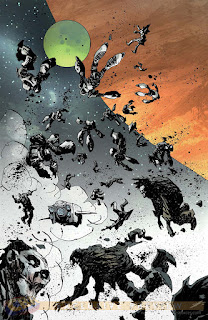 Firstly, I really enjoyed this issue as an introduction. For these reasons: 1. It contained enough information about the setting to let me know that I actually care. One thing I hate about a lot of science fiction and fantasy books, is when the first issue doesn't give you a good run down of where the characters are and what era they are in. What future? What past? What planet? We have answers here and that's important.
2. I received a good sense of who the characters are, what kind of attitudes they have and how they interact with each other. A brief look at their relationships with one another. This is just enough to get me interested.
3. Beautiful panels of space. Need I saw more? Really?
4. An exciting and surprising development that left me with questions and wonder at the very end of the issue which is a MUST in monthly serials. 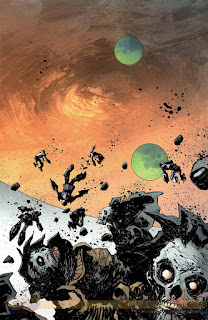 These are the basics needed to push out a successful first issue. We've achieved that here. Requirements made! So art-wise, I'm pretty happy. Illustrator Christopher Mitten has created some beautiful panels of space. Kinda fell in love with them. You might recognize Mitten's work from Wasteland which is an on-going series from Oni Press.  It's a post apocalyptic story which started back in 2006 written by Antony Johnson who I've actually interviewed before about his series Umbral.  I have yet to read Wasteland. It's on my list.

Black Mask Comics has been making me really happy lately. I love current series We Can Never Go Home and Space Riders. Now I can add Disciples to the list of monthly purchases.
Posted by The Frog Queen at 4:39 AM