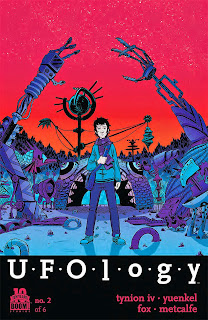 This is quickly becoming one of my favorite new series. It's got the things I care about. It's pretty, full of mystery and contains a decent script. I really like how the characters interact with each other. I also like that this story isn't riddled with white people. Yeah you heard me! It's not all a bunch of white people. It's got some heart, some ethnicity, some realness about it. I like how comics have been becoming more diverse, although most of the Marvel fans out there who are still pissed about Miles Morales would argue with me. They're a bunch of a racist fucks though.

I know, I'm swearing a lot today but I've just so had it lately. Seems like all I can do is retreat into comics or video games. Escape, escape. This is a pretty decent book for that. I was distracted for a whole 15 minutes! A whole 15 minutes I wasn't worrying about stupid adult life. Which brings me to the number one thing that alerts me that I'm reading a bad comic (or bad issue). If I can't focus on the story and my mind constantly wanders to my adult shitty reality over and over again. That's a shitty comic. Sadly, I read quite a bit of those, most of them are from the big two and Image. Haven't been super loving the Image series this year. Not sure why but I've been pretty damn impressed with Boom's titles.

Anyway, I'll stop yammering! You need to check out this comic because the script is up-beat, the pacing of the first two issues were bang on. No big lulls. No jumping around in the story so that you're right confused. Also lots of mystery! Fantastic artwork too! I think I mentioned in the past that the whole book reminded me a lot of Carla Speed McNeil's Finder series even though it has a totally different plot.
Posted by The Frog Queen at 4:57 AM